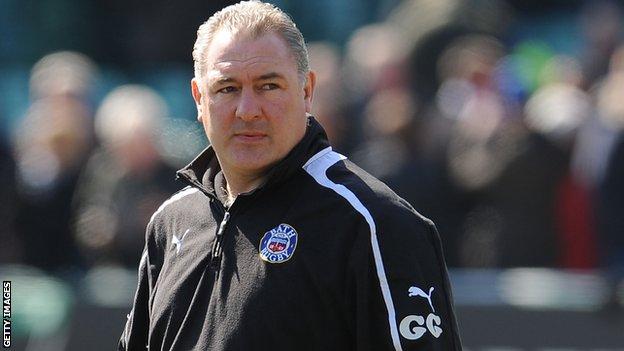 The West Country club, who have never won the league in the professional era, are currently seventh in the table and 11 points from the play-offs.

South African Gold, in his first season in charge at the Rec, told BBC Radio Bristol: "We've been disappointing by our own standards.

"I take full responsibility. We could have been in a much better position."

He continued: "Losses to London Irish, Sale and London Welsh on the road are absolutely unacceptable.

"Whatever the reasons, it's not how we anticipated the season would go."

Before rugby turned professional in 1996, Bath had won six domestic league titles and 10 cup competitions, but they have not lifted a trophy since their Challenge Cup victory in 2007-08.

Under the leadership of Sir Ian McGeechan, Bath could only manage an eighth-place finish last season, and former London Irish and Newcastle coach Gold arrived with a new-look backroom staff in the summer.

Gold led them to the Amlin Challenge Cup quarter-finals and the semi-finals of the LV= Cup, but the team have failed to reach the top half of the Premiership.

Despite his frustrating first term, he added: "I understand it's not visible to the fans, but there's been huge lessons learnt.

"We've made small but significant strides off the field and we've got two weeks to end the season on a high."

Gold's wish may be hindered by the number of injuries in his squad.

"It's a warzone at this end of the season," added Gold. "It's a case of last man standing."