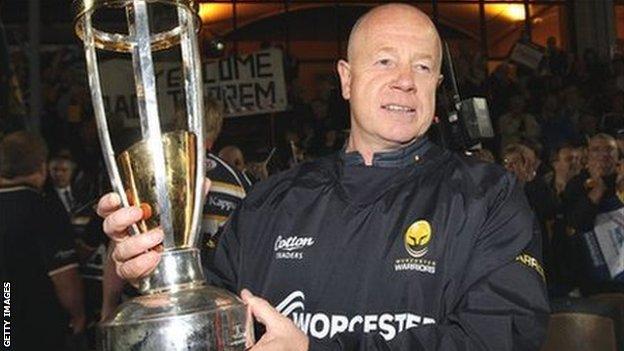 Worcester Warriors have defended the decision to sack head coach Richard Hill - and the manner it was handled.

The appointment of director of rugby Dean Ryan on Wednesday was announced just 12 hours after Hill was sacked.

"If Richard says 'I knew this was coming', then we've got a guy already defeated in what he was doing," the club's rugby committee chairman Bill Bolsover told BBC Hereford & Worcester.

"We didn't. We had a guy who was still prepared to work very hard."

He added: "I actually think that was a good idea.

Some Warriors supporters have questioned the timing of the dismissal, given that Hill had already done much of his revamping of the squad for next season, having been allowed to make eight new signings to counter the club's six departures.

Hill was allowed to rebuild his backroom team last summer, with the appointment of forwards coaches Nigel Redman and Phil Vickery and attack consultant Mathieu Rourre.

But Bolsover insists that recruitment of new players at Sixways is now done by committee.

"One of the reasons we brought in Corin Palmer as operations director last summer is to make sure that recruitment was correct," added Bolsover.

"So for the last 12 months it hasn't just been Hilly.

"We have brought in eight or nine players as a rugby committee.

"As head coach Richard sits on that rugby committee.

"He can put forward exactly what he wants to do and, through our coach, through the director of operations and that committee, we will then look at who we want to take on.

"I actually believe what we have currently recruited is what we want, but that is entirely up to the director of rugby.

"We have got scope to bring in other people if we require it but I want him [Ryan] to make that decision when he comes here and gets his feet under the table."

Rugby operations director Palmer will take charge of senior team matters for the last two league games of the season against Harlequins on Saturday and then at already-relegated London Welsh on 4 May.