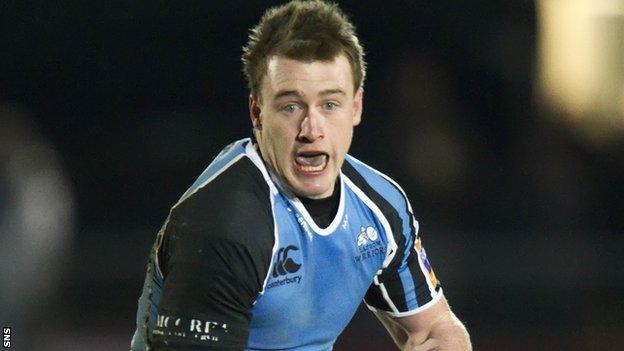 Scotland's Stuart Hogg has revealed he is pleased to be linked with a British and Irish Lions call-up.

The full-back starred in Scotland's recent Six Nations campaign, which has led to talk of his inclusion on this year's tour of Australia.

"Obviously it's great that your name's getting flung about there," he said.

"I'm a big believer that what's for you won't go by you, so, if it comes it comes, if it doesn't I'll continue to work on my game."

However, the Scotland full-back knows he faces a more immediate test as Glasgow prepare to face Ospreys in a cruial Pro12 fixture at Scotstoun on Friday.

"We need to win to get in the play-offs," said Hogg. "We'd love to be in first or second place to guarantee a home semi-final.

"It's all about the win. At the start of the season we targeted being in the play-offs, if not winning the competition.

"We want to be the first Scottish side to win the competition."

Gregor Townsend, Hogg's coach at Warriors, described Friday's match with Ospreys as one of the biggest of his coaching career.

"It's where you want to be as a professional rugby player," he said.

"You're playing the champions, it's the last home game of the season - the last game for a few players who might not be here next season - and you know if you win the game you're in the play-offs.

"And an extra little bit of motivation, our last game we didn't play well at all so we've got a lot of things to put into this 80 minutes."

The former Scotland stand-off warned against repeating the mistakes of their last Pro12 outing, a 29-6 defeat by Scarlets.

"Maybe we had a different mental approach going into the game, but we weren't at our best.

"But there's always learning when you play, and sometime defeats are more important than victories.

"The fact we're playing the team with the best defensive record in the league, we have to be at our best level."

The warriors head coach also called for the home fans to play a big part, with an extra stand being installed at Scotstoun and a full house expected.

"Our last game, against Munster, was a sell-out and the energy we get from the supporters is great," said Townsend.

"You can see the players really respond to it."