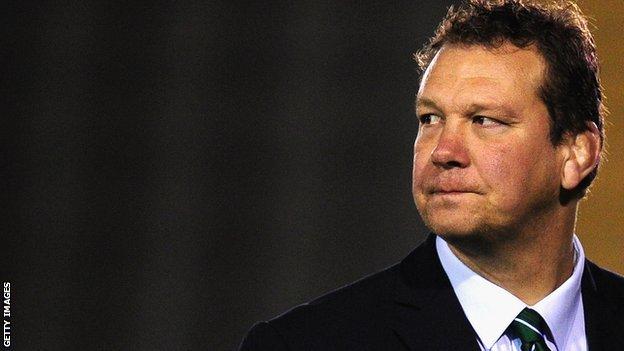 Nottingham Rugby need £250,000 to keep them in business for the rest of this season and build for the next campaign.

The Green & Whites have been plagued by financial difficulties in their recent past and the problems have resurfaced despite a fine season on the pitch.

Nottingham will finish the regular Championship season in second and could yet win promotion via the play-offs.

But chairman Alistair Bow said: "Our owners can no longer meet the current financial demands of the club."

The club has moved on a long way in the last two years and we have laid some excellent foundations for the future...but we need new funders

But the club, who play at the Meadow Lane home of Notts County Football Club, have struggled financially for a number of years and came close to folding in 2008.

And Bow said that owners Luke Jones and Jason Brewer can no longer continue to bridge the funding gap and the board has to secure additional funding to maintain the current commercial model.

"We've had an excellent season, better than we expected when we set out our objectives this time last year," Bow said. "But achieving this success comes at a high cost.

"Luke and Jason would both like to stay involved, but in order for us to carry on playing at the top of the RFU Championship challenging for promotion, we need to bring additional funding in.

"We have already identified one or two new investors, but we still need more funds to bridge the gap this season."

Head coach Martin Haag recently signed a two-year contract and chief executive Simon Beatham said progress had been made off the pitch too.

He said match-day income and attendances were both up on last season, while sponsorship and hospitality incomes were also increasing.

"The club has moved on a long way in the last two years and we have laid some excellent foundations for the future," Beatham said.

"We have re-established the Nottingham Rugby brand in the local community and our fan base is increasing. We have excellent playing and training facilities at Meadow Lane and Lady Bay Sports Ground, and some very strong community rugby partnerships with local businesses and councils.

"We want to keep this momentum going, but we need new funders to help us challenge for promotion this season and continue our strategy to remain in the top four of the Championship if we don't make it."