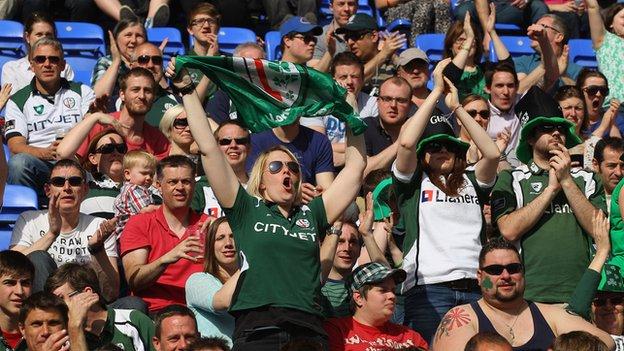 Parr is a 29-year-old loose-head prop who has previous Premiership experience with Leicester, Sale and Saracens.

"We are delighted to have these two players on board for the next few seasons," said Exiles director of rugby Brian Smith.

"Matt will bring massive strength, work rate and experience in a key position which will be crucial for us going forward.

"Nic also has a great work-rate and is a very physical player. Glenn Delaney has worked with both Nic and Matt and is very happy that both will be joining us next season."

Parr said he was relishing the chance to further his career at the Berkshire club: "I'm looking forward to joining London Irish next season. They are an ambitious club with some great players. Until then I will be concentrating on Nottingham and the club's promotion push."

Rouse echoed his team-mate's words adding: "It will be an exciting challenge when I join London Irish in the summer.

"They have really showed in the last few months that they are a top side and I am sure we can push on next season. There is still work to be done at Nottingham and that will have my full attention until the end of this season."

Meanwhile, Irish have confirmed 23-year-old prop forward Max Lahiff will join the Melbourne Rebels at the end of the season.

Lahiff, who qualifies to play for Australia through his father, joined the London Irish Academy in 2009. He has made 59 first team appearances and scored his first try in the 33-33 draw with Sale on the 31 March.