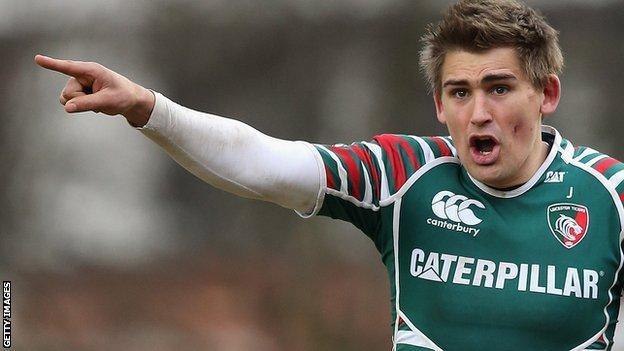 Leicester Tigers and England fly-half Toby Flood insists he has had no discussions about moving to France and "loves" playing at Welford Road.

Flood will enter the final season of his contract in the next campaign and has been linked with a move abroad.

But the 27-year-old told BBC Radio Leicester he is happy where he is and there is no rush to sign a new deal.

"I love it here. In some regards it is nice to be linked with France but nothing has been said," Flood said.

"There is always speculation but I am enjoying my time here and for me there is only one club in England you want to be at and it is this one."

Flood has helped Tigers reach second place in the Premiership, and although they were beaten in the Heineken Cup quarter-finals last week, he says there is plenty to keep his mind on matters on the pitch.

"It's purely rugby focused," said Flood, who joined Tigers from Newcastle in 2008.

"We will head out this summer and when we come back things will start moving in the last year. Historically contract negotiations start in the season it runs out and nothing has really changed.

"I am very much focused on getting it right on the field going towards the end of the year and the play-offs and hopefully the final."