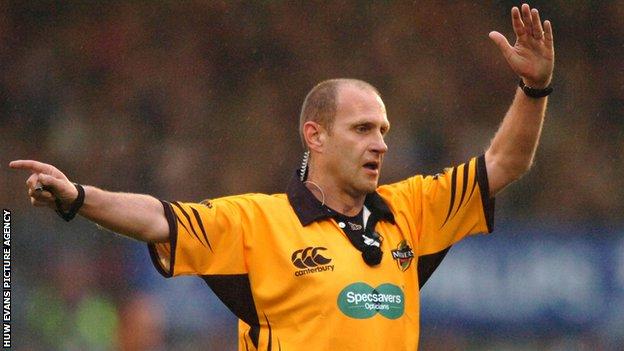 A rugby referee of 20 years says he is "astonished and disappointed" after being banned for 12 weeks for a comment he made on Twitter.

Hugh Watkins questioned a referee's decision not to show a red card for a dangerous tackle in the Hong Kong Sevens final between Wales and Fiji.

He resigned immediately after being told by the Welsh Rugby Union that he faced disciplinary action.

"It does leave a bitter taste in my mouth at how it's all ended," he said.

The WRU says Watkins, 49, breached the code of conduct for referees which prohibits any public criticism of fellow match officials.

A disciplinary hearing was held in his absence on 9 April where he was found guilty and banned.

"Mr Watkins resigned before the case was heard and indicated he did not wish to attend the panel," said a WRU spokesperson.

"In his absence the case was proven and he was suspended from all match official activities for a period of 12 weeks."

While watching Wales play Fiji, Watkins posted a comment on Twitter when Fiji's Ilai Tinai was yellow-carded for a tip-tackle on Lee Williams in the first half - an offence normally punished by a red card.

He wrote: "Sorry that's a shocker. Had to be red no other option. We need referees to be consistent in this."

On reflection, Watkins says he regrets making the comment but stressed that the 12-week ban is totally disproportionate, particularly in light of Jerome Fillol's recent 14-week ban for spitting in the face of Peter Stringer.

"He's had 14 weeks for spitting in someone's face, I've had 12 for a little comment. There doesn't seem to be consistency," he said.

Watkins, who officiated in the 2007 Rugby World Cup and in the Celtic League, added he is saddened that his long referring career has ended in such a manner and felt he deserved better treatment from the WRU.

"Having given 20 years of service to the Welsh Rugby Union, eight of those as a professional, I just thought that this could have been handled far better.

"I still feel the comment wasn't hugely critical, it was just my feelings."