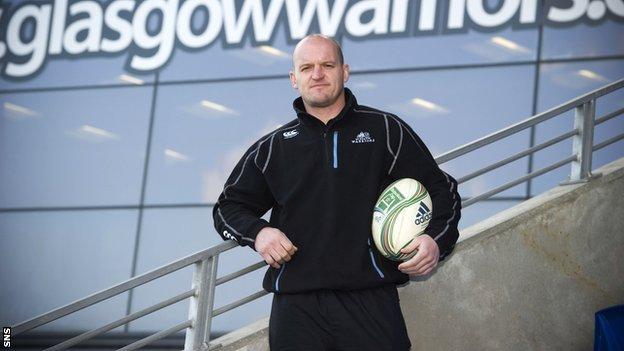 Glasgow Warriors head coach Gregor Townsend maintains that if his team can beat Ospreys at Scotstoun on Friday evening, they will fully merit their play-off place in the RaboDirect Pro12.

The Scots are in third place and need a victory over the reigning champions to guarantee a semi-final slot.

"It will be what the players deserve," said Townsend of such a prospect.

"They have worked so hard and have progressed really well. We have had some memorable nights at Scotstoun."

And he added: "It's not just the lucky 15 that are starting tonight; we've got a squad of 45 players who have put in so much effort and if things go well then we can cap that off with a play-off position."

Warriors will have the backing of more than 6,200 fans at the stadium in the west end of the city in what is likely to be the final home match of their season.

However, they may yet be rewarded with another game at Scotstoun since a top-two finish in the Pro12 table is not beyond them - a victory over Ospreys with a bonus point combined with second-place Leinster failing to secure a four-try win over Zebre on Saturday afternoon would have the pair level on points going into the final round of games.

It's the last home game of the season, the weather is great and we can't wait to get out there

Glasgow's final match is at Connacht on 3 May, the same day Leinster host Ospreys.

Ulster look a good bet to top the Pro12 after the completion of the 22 ties. They are on 71 points, three more than Leinster and four ahead of Glasgow.

Townsend, in his debut season at the club after taking over from Sean Lineen, is in no doubt how big a test the Welsh region, in fourth place, will pose his men.

"It will be very difficult," he told BBC Radio Scotland.

"They have the best defensive record in the league. I think they have only lost one game since round three.

"They are on a run of form. They also know they probably have to win their last two games to get a place in the play-offs so it's a huge game for them as well.

"This game is what you look forward to as a coach and a player.

"It's the last home game of the season, the weather is great and we can't wait to get out there."

Townsend, of course, will be hoping that his players perform better than last week when they were humbled 29-6 at Scarlets.

"We had built up really good momentum playing very good rugby in attack and defence but for some reason we just didn't turn up," the coach said.

"We didn't take initiative in attack, we were passive in defence, and Scarlets, who were highly motivated, played much better.

"You can't win every game but what you do look for in your players and what we have prided ourselves on this year is fronting up and we will have to do that tonight."