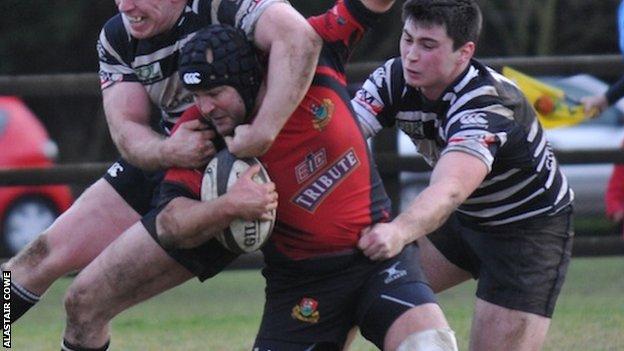 Redruth forwards coach Ashley Morcom has urged the team to raise their game in their final fixture of the season after a 50-17 hammering at Clifton.

Fourth-placed Reds conceded eight tries and are just one point ahead of fifth-placed Shelford, who have a game in hand on the Cornish club.

"We've just got to make sure we turn up for training and put it right for Taunton at home."

Redruth conceded a touchdown after just two minutes as Sam Harrison went over and Clifton were soon 14-0 up with the help of a penalty try.

Callum Bailey's 28th minute score made it 21-0 before Owen Hambly and Neil Turner replied late in the half to reduce the deficit at the break.

James Golledge scored twice for Clifton in the second half and Paul Finken and Ben Roberts before Hambly got a late consolation for Redruth.

"We were chasing it from the off, we let them have too much ball," said Morcom.

"We've got to assess the game, see where we went wrong and why, but we won't brush it under the carpet as we've got to build for next season and if we do things like that we'll never move forwards.

"The Clifton line were very quick and they ran round our backs easily, we let them have too much quick ball at ruck time.

"Clifton lost a lot of games in the wet weather and those conditions suit us, but the weather we've got at the moment doesn't really suit us. That's something we've got to address," he added.