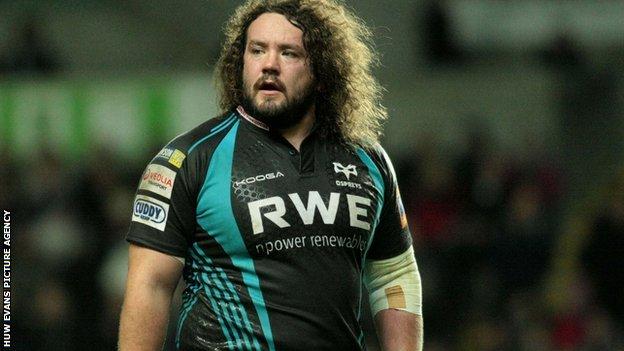 Adam Jones has criticised the Welsh Rugby Union after it banned a referee for a remark he made on Twitter.

Referee Hugh Watkins resigned before he was suspended by the WRU on Tuesday.

The Wales, Lions and Ospreys prop's remark comes after the ongoing dispute between the WRU and the Welsh regions.

"Maybe if the WRU worried about themselves and the regions sorting their crap out and not banning a ref for tweeting we may get somewhere!" tweeted Jones.

Jones later removed the comments from his Twitter feed.

Watkins, a rugby referee for 20 years, said he was "astonished and disappointed" to be banned for 12 weeks.

While watching Wales play Fiji in the final of the Hong Kong Sevens on 24 March, he posted a comment on Twitter when Fiji's Ilai Tinai was given a yellow card for a tip-tackle on Lee Williams in the first half - an offence normally punished by a red.

"Sorry that's a shocker," Watkins tweeted. "Had to be red no other option. We need referees to be consistent in this."

Watkins admitted he regretted making the comment but said the 12-week ban was totally disproportionate.

He resigned immediately after being told by the WRU he faced disciplinary action.

The WRU and the Welsh regions - Scarlets, Ospreys, Cardiff Blues and Newport Gwent Dragons - have been embroiled in a bitter row about funding, central contracts and Wales wing George North.

The two parties are set to meet next Thursday in an attempt to settle the ongoing dispute that has dominated the the sport over the last month.

The regions had turned down an invitation to discuss a WRU proposal to contract players centrally, but will now meet the whole of the WRU board.

Wales wing George North's transfer from Scarlets to Northampton sparked the row between regions and union.

Since then, the two parties have issued claim and counter-claim over "control" to back up their respective views of the future of the professional tier in Wales.

A spokesman said the WRU would not be commenting on the remark made by Jones, while the Ospreys have also declined to comment.