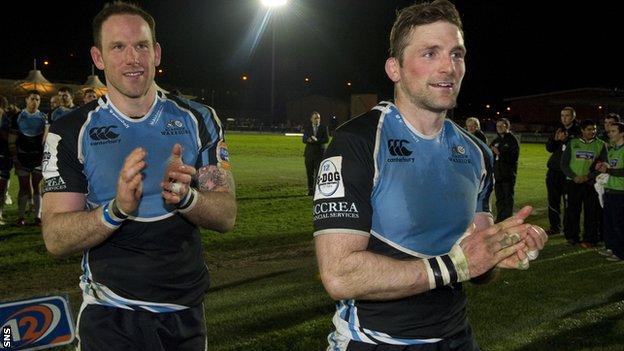 Head coach Gregor Townsend believes Glasgow can go all the way now that a Pro12 play-off place has been secured.

"Any of the teams in the last four have a chance of winning the title," he told BBC Scotland after a five-try 35-17 win over Ospreys at Scotstoun.

"I would think we will have an away semi-final but whoever we get, we'll be playing tough opponents.

"If it's going to be Leinster or Ulster then we know what we have to do to win those games."

The impressive victory against defending champions Ospreys lifts Glasgow into second place in the table but Leinster can overtake them with a bonus-point win at Zebre on Sunday.

To wrap up the regular season Glasgow visit Connacht in a fortnight's time, with the teams finishing first and second getting home advantage in the semi-finals.

The Warriors have twice been beaten at the last four stage but will be confident of going one better after a string of strong displays in what is Townsend's first season in charge.

The celebrations at Scotstoun were tempered, though, by a serious leg injury suffered by stand-off Duncan Weir, who was stretchered off after receiving a lengthy spell of medical attention.

"He'll miss the rest of the season and probably be out for the start of next season. It's a real shame for him.

"To miss out on the last couple of games will be disappointing but there will be other players there to take their opportunity and play for Duncan."

Ospreys were sunk by first-half tries from prop Ryan Grant (two) and winger Sean Maitland before scrum half Niko Matawalu grabbed the fourth in the second half and DTH van der Merwe made himself the top Glasgow try scorer with a counter to close the game.

"We were up against a very good side and we knew the stakes were high," added Townsend.

"If we lost this one, we'd have been under a lot of pressure to make the semis.

"So that was a great response against the best defence in the league - I think they concede on average 0.7 or 0.8 tries per game.

"For the players to create all of those chances just shows how much we have progressed."

A record Scotstoun crowd of 6,642 were entertained as Glasgow showed why they head the Pro12 for tries scored and bonus points.

"We take the initiative and our players have got a positive mind-set in attack and defence," explained Townsend.

"You need balance in the game and first and foremost you need to have a good defensive platform.

"The players have confidence about when to go at space; not all of it comes off but when it does it is very hard to defend against.

"Some of the pace we put on the ball in the first half, the Ospreys were really struggling to keep hold of us."

John Barclay and Graeme Morrison both impressed in what is likely to be their final home match for the Warriors, with the experienced internationals destined for pastures new next season.

But skipper Al Kellock is hoping there could yet be another fixture at Scotstoun this term.

"I'd love to bring a play-off back to Glasgow," said the lock.

"We've got to go to Connacht and do everything we can to get the win and then see what happens elsewhere.

"We've got to be confident with some of the performances we have put in but there are good teams left in it and we'll need to be at our best."