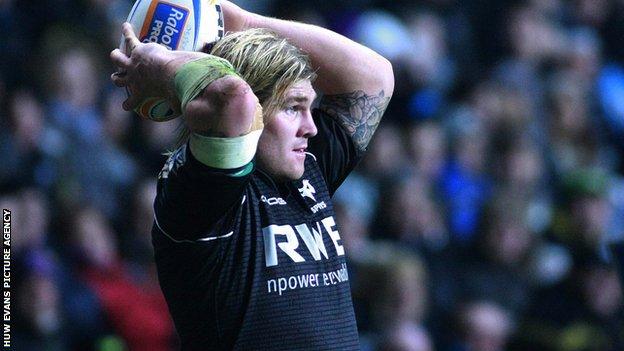 Ospreys are confident Richard Hibbard will not face a long lay-off despite injuring knee ligaments against Glasgow on Friday.

The Wales hooker limped off after 18 minutes of Ospreys' 35-17 defeat by Glasgow Warriors at Scotstoun.

But the Welsh region are "optimistic" he will be out of action for two weeks at most and could be fit for the final Pro12 game of the regular season.

Ospreys face Leinster on 3 May, needing a win to their maintain play-off hopes.

The reigning Pro12 champions are currently four points behind Scarlets, who occupy the fourth and final play-off place and host Treviso on the final weekend.

Hibbard's injury had raised fears over his prospects of being named in the British and Irish Lions squad to tour Australia over the summer.

Coach Warren Gatland will name his squad on 30 April, and Hibbard is expected to be among a large Welsh contingent to be selected.

The 29-year-old emerged as first-choice hooker for his country during Wales' 2013 Six Nations title winning campaign.

The 23-times capped international has been mentioned, along with Ireland's Rory Best, as one of the hookers expected to fight it out for a Lions Test place against the Wallabies in the summer.