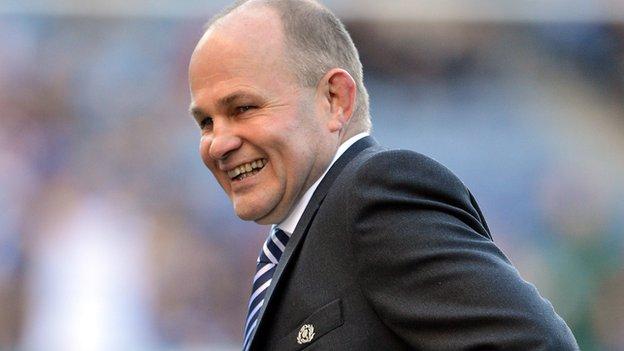 The Falcons were unbeaten in the league until Saturday's final game of the season, which Bristol won 19-14.

The result was not enough to secure Robinson's side a play-off place and their focus has now shifted to next season's promotion push.

"We want to be like Newcastle next year - the team that's in pole position to go up," said head coach Robinson.

"That is what is required for the whole of next season. We can't drop off this. This is the level we have to push ourselves to."

Bristol were denied a play-off place after Leeds beat Nottingham to occupy the fourth and final spot in the standings.

The West Country side have strived to regain their top-flight status since their relegation in 2009, but have failed to make it through the knock-out stages despite finishing top of the table on two occasions.

Former England and Scotland coach Robinson was brought in to try and boost their promotion chances and, although they narrowly missed out in his first season, he remains confident it can be achieved next term.

"You can see the improvements that we've made and we've got to keep pushing on," the 49-year-old told BBC Radio Bristol.

"They've understood what it is to play at this level. What I'm delighted about is that we sustained our performance for 80 minutes [in the victory over Newcastle].

"We've got to be able to play at those levels and I believe we'll work had to achieve that."