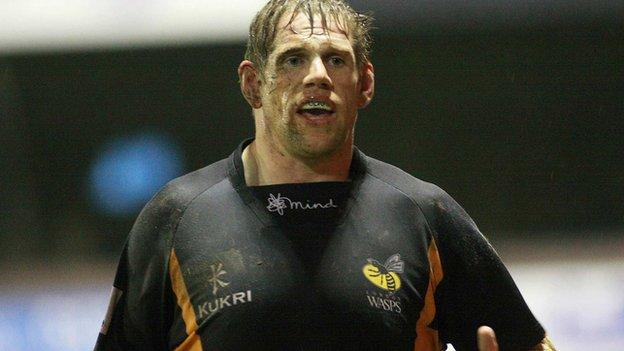 Thomas, 30, will head home to Wales after a season with only London Wasps.

"I am really gutted to be leaving Wasps after a year because from a rugby point of view it's been a fantastic experience and I've loved every minute of it," said Thomas.

Thomas, who won 27 Wales caps, made his debut for his country against the USA Eagles in 2005.

I did, though, completely underestimate how difficult it would be to be away from my three kids and my wife, who weren't able to move up with me.

He joined London Wasps last summer but the Premiership club are releasing him from his contract so he can return to Wales and his young family who are based in Cardiff.

"I did, though, completely underestimate how difficult it would be to be away from my three kids and my wife, who weren't able to move up with me," said Thomas.

"Travelling back and forth has been really tough and I am incredibly grateful to Dai (Young) and Wasps for understanding the situation I'm in.

"I want to say thanks to everyone who has helped and supported me this season.

"I am leaving a club that I think is well on the way to becoming a massive force again in English rugby and I am just sorry I can't be part of it."

Abercynon-born Thomas began his professional career at Cardiff in 2003 and made a try-scoring debut for the Blues against Celtic Warriors in December 2003.

"It's a difficult situation and one we would rather not find ourselves in given the timing, but we do understand that family comes first," said David Young, the London Wasps director of rugby.

"TR has had a very good season with us and I'd like to thank him for his contribution over the past year. I know him well as a player and I know how difficult this was for him."

"Rhys will be a great addition to our pack of forwards, he brings with him a wealth of experience," said Dragons Head coach Darren Edwards.

"I am confident he will make a difference on the field and also be a great mentor for our other hookers and young players."