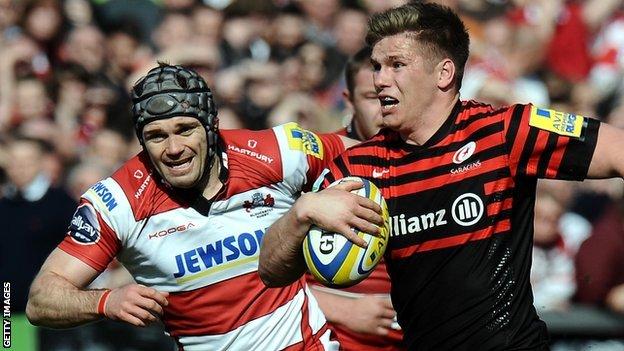 Owen Farrell has described Jonny Wilkinson, his predecessor as England fly-half, as an "unbelievable" player who he "respects massively" ahead of their first ever meeting on the pitch.

Wilkinson's Toulon side face Saracens in the semi-finals of the Heineken Cup at Twickenham on Sunday.

"Jonny set the standard and pushed the bar right up as far as fly-halves are concerned," said Sarries' 10 Farrell.

"He's an unbelievable player - everyone wants to follow in his footsteps."

Farrell, 21, was watching on TV as an 11-year-old when Wilkinson kicked the World Cup-winning drop-goal against Australia in 2003.

The 33-year-old former Newcastle player, who retired from international rugby after the 2011 World Cup but is still the second-highest points scorer in Test history, then suffered a series of injuries over an eight-year period.

But his move to France has been virtually injury-free, his form, in the view of some pundits, is approaching that of a decade ago and he has just signed a new one-year deal with Toulon.

Asked if Wilkinson was a player he respected, Farrell replied "yeah, just a bit!" and added that there are "lots of things he admires" about the older man.

Farrell told Saracensrugbytv: "Not only does he control the game, and everyone talks about the work he puts into his kicking, but he smashes people in defence as well.

"He gets stuck in and puts his hands up for the team. A lot of people respect him for that."

Toulon have won all five of their previous Heineken Cup matches against English clubs and will arrive at Twickenham with an expensively assembled squad bursting with household names.

"[Former Australia international] Matt Giteau's there and he's a special player and just outside him is [France outside centre] Mathieu Bastareaud, so you can't afford to focus on one player," Farrell added.

"Their squad is unbelievable, full of established internationals.

"This tournament is the best of the best, so to be involved in a semi-final against a team like Toulon is a massive privilege.

"I've never been involved in a Heineken Cup semi-final before, so that makes this a bit special."