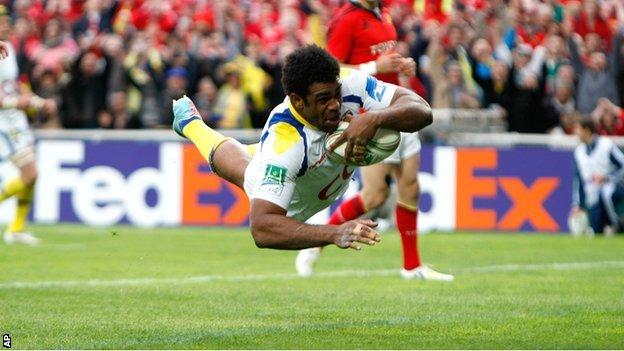 The Irish province took the lead through an early Ronan O'Gara penalty.

But Clermont seized control and Napolioni Nalaga's try and a conversion and two penalties from Morgan Parra gave Clermont a 13-3 half-time lead.

Parra added a third penalty and although Denis Hurley's converted try gave Munster hope, it is Clermont who go into the 18 May final in Dublin.

The French side, who will face the winner of Sunday's semi-final between Saracens and Toulon in the final at the Aviva Stadium, were deserved winners but after being in control for the first 50 minutes they were forced to hang on grimly in the closing stages.

Clermont let slip a 12-6 half-time lead in the last four against Leinster last year, eventually losing 19-15 after Wesley Fofana knocked on over the line in the closing stages.

When two-time champions Munster yet again demonstrated their never-say-die attitude with a nerve-wracking late assault it looked as though the French league leaders might be denied once more.

But in the end they got over the finishing line to confirm that the nearly men of French rugby - they lost 10 grand finals before finally winning the French league title at the 11th attempt in 2010 - have emerged as one of Europe's genuine powers.

As a club they may have been appearing in only their second Heineken Cup semi-final - two-time champions Munster were making a record-equalling 10th appearance - but Clermont's 23-man squad had much greater experience than that of the Irish province.

Munster's O'Gara and Paul O'Connell both have huge Heineken Cup pedigree - indeed O'Gara went into the match holding the record for both the most appearances (109) and points scored (1,360) in the competition - but the rest of their team was very callow compared to their French opponents.

From one to 15 Clermont oozed class and although Munster were never less than fully committed, in the end the French side's pace, power and skill was just enough to overcome Munster's cussed refusal to accept defeat.

Their renowned passion had driven them to victory over Harlequins in the last eight, but it can boil over and the match started with fired-up captain O'Connell effectively tackling his own full-back immediately after Felix Jones had caught the kick-off.

Despite that over-enthusiastic start the Irishmen settled down to take an early lead through the prolific boot of O'Gara, but Clermont soon found their rhythm and went in front courtesy of a sweeping multi-phase attack.

At one point it looked as though the move was in danger of grinding to a halt but mighty winger Nalaga burst through the tackle of O'Connell at a ruck to restore the momentum and a couple of phases later the Fijian ignored a three-man overlap as he stepped inside the cover and scored by the posts.

Parra converted and soon added a brace of penalties, but despite pinning Munster back for much of the half Clermont could not put them away and the Irishmen only trailed by 10 points at the break.

It was not a decisive margin but Munster needed the next score to stay in touch.

However, despite getting within a couple of metres in the closing stages of the first half after a chip from Keith Earls was won back by some excellent rucking, and then putting pressure on the hosts' line-out after a laser-guided touch-finder from O'Gara early in the second, Munster could not force a breakthrough.

When another powerful Clermont attack brought a penalty Parra pinged it over and even though there were 35 minutes remaining, a French victory already looked inevitable.

But if there is one team in Europe that never knows when they are beaten it is Munster, and they attacked the breakdown to force a couple of turnovers and halt Clermont's momentum.

With Munster having finally forced a foothold in the Clermont half O'Gara's educated boot began to talk and it was his slide-rule grubber kick that sent replacement full-back Hurley over on the hour.

O'Gara drilled over the conversion from out wide and there were only six points in it - less than a converted try.

The vociferous French fans were suddenly much quieter and they were mightily relieved as Casey Laulala knocked on over the line as a handful of players tried to touch down a kick ahead at full pelt.

The Irish province came again and again and forced a great chance with a couple of minutes remaining, but scrum-half Conor Murray's pass failed to find a Munster player as they swept towards the line.

The two-time champions may have been beaten but a young side at least added another exciting chapter to Munster's glittering European history.

As for Clermont, they will be hoping their story still has a happy ending to come.