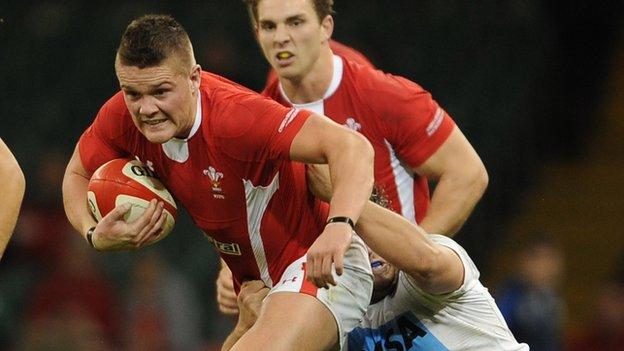 He has won nine Wales caps but has fallen down the Scarlets' scrum-half pecking order this season.

"Tavis needs to play regular rugby and if the opportunity is in Gloucester then... most people will wish him well," said Jones.

What we do have in Wales is a lot of good, young scrum-halves coming through the system

"I think it was expected - there have been some rumours of late and Tavis hasn't featured much for the Scarlets.

"It will be a big disappointment to him. Obviously he has been a big part of the Welsh set-up over the last few years.

"Perhaps it shows as well the depth and quality the Scarlets have in the scrum-half position."

Aled Davies, Gareth Davies and Rhodri Williams remain on the Scarlets books, each having impressed at various times this season.

Jones, who won 54 Wales caps in a 10-year Wales career, added: "They seem to be the players the Scarlets seem to put in more faith in.

"If he is not going to get that here in Wales he needs to look at where that opportunity lies.

"Gloucester are a very good club, traditionally one of the strongholds of English rugby.

"And with Nigel Davies there who knows him well, it is an opportunity for him to re-establish himself and club level and push for international honours.

"The fact that he has played for Wales, the fact he has done well for Wales shows that he is a quality number nine.

"What we do have in Wales is a lot of good, young scrum-halves coming through the system.

"And probably Tavis is in that position at the moment."