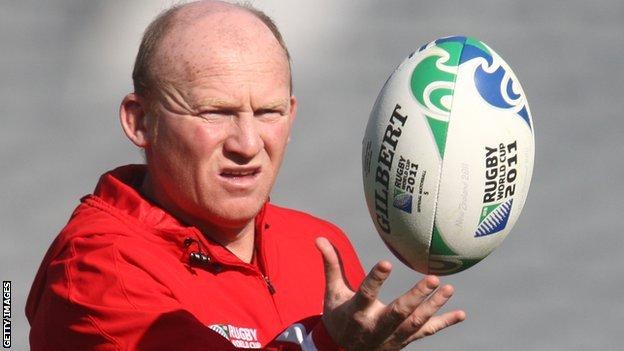 Former Wales fly-half Neil Jenkins has been appointed as an assistant coach for this summer's British and Irish Lions tour to Hong Kong and Australia.

The 41-year-old will be technical kicking coach, a position he filled on the 2009 Lions tour of South Africa.

Head coach Warren Gatland said: "He has been in the coaching environment in this crucial area with great success in recent years with Wales."

The former Pontypridd, Cardiff and Celtic Warriors player, who scored 1,090 international points, was a key member of the Lions' successful 1997 tour to South Africa and the 2001 defeat in Australia.

He now works full-time for the Welsh Rugby Union as a kicking specialist, but his role with the Lions means he will miss Wales' two-Test tour to Japan in June.

"It is a great honour to once again be part of a British and Irish Lions tour," Jenkins said.

"I have clear ideas of what I would like to contribute and I cannot wait to get out onto the training pitch and get started."

Gatland says Jenkins will bring a huge amount of experience to his coaching staff.

"The tour to Australia will be one hell of a challenge and we need to ensure that our approach in all aspects of the game is first rate," he added.

"Tactical kicking, when to kick, how to kick, and of course converting points through penalties and conversions is crucial to on-field success.

"Neil brings extensive knowledge to the squad in this area and the players can only benefit from this."