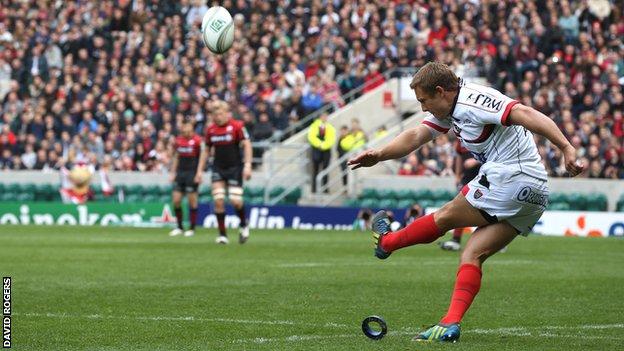 Jonny Wilkinson booted seven penalties and a drop-goal to steer Toulon past Saracens into an all-French Heineken Cup final against Clermont Auvergne.

Saracens wasted two try-scoring chances with botched passes from Farrell and Joel Tomkins but were overpowered by Toulon's expensively assembled side.

They will now meet Clermont, who beat Munster 16-10 on Saturday, at Dublin's Aviva Stadium on 18 May in the fourth final to feature two French clubs in the tournament's 18-year history.

The pre-match script suggested it would be a bruising battle which would be decided by a kicking shoot-out between England's World Cup-winning fly-half Wilkinson and his latest successor in the England shirt, Farrell.

That was the case for the first half but after the break Toulon's power increasingly told - although Sarries will be kicking themselves for not taking their chances on the rare occasions they threatened the French side's line.

Both clubs are backed by big money investors but Toulon's playing budget is three times that of Saracens, who are limited by the English salary cap.

As a result Toulon fielded a side liberally sprinkled with some of the past decade's leading players, with South Africa's Bakkies Botha and Australia's Matt Giteau joining Wilkinson on the team sheet.

Saracens had plenty of big names of their own, including six backs with England caps and bullocking England prop Mako Vunipola, and the loose-head had a big game in the loose.

But Toulon had the edge in the scrums and won some important line-outs against the throw, and in the closing stages they regularly halted Sarries' attacks by dominating the ruck, where Chris Masoe was a real menace, and forcing penalties and turnovers.

The Londoners took an early lead courtesy of a Farrell penalty but Toulon were the better side in the opening stages and three Wilkinson penalties gave them a 9-3 lead after 18 minutes.

Saracens struggled to make much headway against the imposing opposition defence, with Springbok flanker Danie Rossouw a big presence, but they gritted their teeth and two Farrell penalties to a fourth from Wilkinson meant they only trailed by three points at half-time.

It could have been level but Farrell missed a long-range effort with the last kick of the half, although after the break he landed a brace of penalties to a solitary Wilkinson reply to keep things interesting.

However, if Saracens were going to win they had to take their chances and they blew the rugby equivalent of an open goal with just under half an hour go after a superb break by Vunipola had carried them into the Toulon 22.

Only a single defender stood between Farrell and a three-man overlap but when he attempted to fire a long pass out to Kelly Brown the ball slipped off the fly-half's fingers and went forwards.

Other half-chances were spurned, notably when Tomkins also fired a long pass forwards as Sarries again attacked down the left, but Farrell's miss was the decisive moment.

Toulon had lost Rossouw to the sin bin - perhaps harshly - for a high tackle on Vunipola, but in his absence Wilkinson boomed over a penalty from inside his own half, and once the French side were back up to full strength they took charge of the game.

With big hits more in evidence than slashing breaks it was not pretty, and Toulon could not get over the Saracens' line to kill the game off, although two fine Giteau kicks created chances, only for Rudi Wulf's forward pass and Alex Palisson's knock-on to bring an end to proceedings.

As long as they were within a score Saracens could not be discounted, but with seven minutes to play Wilkinson put the game to bed as he side-stepped the on-rushing Farrell and drilled over a left-footed drop-goal on the run.

Farrell's deflation, and Wilkinson's consoling pat on the shoulder, spoke volumes, and it was left to the older man to wrap things up with a late penalty as experience put youth firmly in its place.

Whichever team wins the final a new name will go on the Heineken Cup, and if Toulon are triumphant in Dublin it will be the first victory in a final for Wilkinson since a memorable night in Sydney a decade ago.