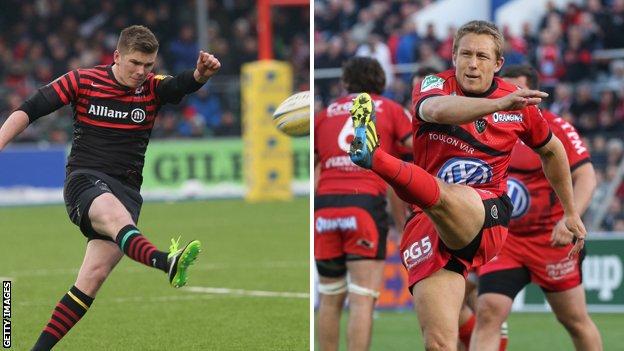 At Twickenham on Sunday, Saracens fly-half Owen Farrell will line up opposite his most famous predecessor in an England number 10 shirt, Toulon's Jonny Wilkinson.

With their sides battling for a first Heineken Cup final appearance and both players' eyes on the British and Irish Lions squad announced two days later, the action will be fierce.

The pre-match words between Farrell and Wilkinson have been less so.

When asked about Lions selection, Jonny Wilkinson promoted Farrell at his own expense earlier this month, saying "there's no need for me to be there with these guys around".

This week, an apparently star-struck Farrell repaid the compliment with interest, describing Wilkinson as

Farrell's admiration is not just based on 2003 World Cup winner Wilkinson's past.

While Wilkinson may have claimed that the Lions can do without him, his performance in the Heineken Cup quarter-finals argued otherwise.

The 33-year-old scored all of his French side's points marrying precision off the tee with physicality in the tackle and outshining his former Newcastle understudy Toby Flood.

Described by Wilkinson was top points scorer in last year's French Top 14 as his side ended as beaten finalists and is well on course to lead them to similar this season.

When he signed Toulon's owner joked that it was only Wilkinson's relatively young age that prevented him erecting a statue of the Englishman.

As part of the coaching team at Toulon's French rivals Clermont Auvergne, Alex King has seen Wilkinson at close quarters over the past four seasons.

King also played with and against Wilkinson during his England and Wasps playing days, winning one of his five England caps as a replacement for him in the 59-12 Six Nations win over Italy in 2000.

"He has probably got better if anything from when I was playing with him for England," King told BBC Sport.

"After being blighted by injury in his last few seasons in England and I think he has got his game back to where it was pre-2003.

"He is a match-winner. It is that simple. He pretty much guarantees you 18-21 points per game. If you score a try on top of that, the opposition is going to have to be a very good side to score more."

Farrell, at 21, is at the opposite end of his career, but it is easy to see why he gets Wilkinson's endorsement.

Both offensive in defence, solid when kicking and shrewd players of the percentages, it would not take the lengthy on-field discussions that Wilkinson had alongside Danny Cipriani in the 2008 Six Nations for the pair to get on the same wavelength.

Their statistics from the Heineken Cup this season are strikingly similar, despite Farrell playing at outside centre for his club in five of his seven appearances in the competition this season.

Farrell's success rate from the kicking tee is slightly superior to Wilkinson's at 76% to 72%, while, his greater number of missed tackles, 11 to Wilkinson's three, reflecting both Wilkinson's watertight defence and Farrell's more exposed position in the backline.

Neither has the searing pace needed to tear apart top-level defences, with only one clean break between them and an average of around five metres gained from each carry.

"Both Owen and Jonny are very determined people," Richard Hill - who won the World Cup alongside Wilkinson and has been an academy coach at Saracens since hanging up his boots five years ago - told BBC Sport.

"They are imperious in the way the run their teams and take control from the outset, making sure they apply pressure on the opposition.

"Some of that revolves around some good tactical kicking, but some it involves getting runners into the game as well."

One insurmountable advantage that Wilkinson holds over Farrell are the street smarts collected across 97 Test appearances.

"I do see a more relaxed Jonny on and off the pitch. He has more of a sense of freedom than perhaps he had in England. He has some incredible players around him, which allows him to relax a bit more, so he doesn't take everything on his shoulders. I don't think he feels as much pressure here.

"He is such a points-scoring machine, why wouldn't you want a guy like that on a Lions tour, who is going to make every mistake and every penalty count? We've seen so many big Test matches decided on kicks and he's the best about. He's also playing exceptionally well."

After England captain Chris Robshaw's suspect decisions in the dying stages of the autumn internationals, Ireland's indifferent campaign under Jamie Heaslip and Sam Warburton excelling without the pressure of skippering Wales, Wilkinson's steadying hand might be an asset in the white heat of a Lions test.

Shaun Edwards, who has worked as Lions head coach Warren Gatland's assistant for Wales, thought enough of Wilkinson to put together a big-money, but unsuccessful, bid for him while the pair were coaching together at Wasps.

However with Gatland wanting all his players to depart on tour together, Wilkinson could be a victim of his own success, finding himself in the Top 14 final on the same day the Lions play their tour opener against the Barbarians in Hong Kong.

Farrell's Lions credentials have also been questioned with his versatility, potentially a useful asset on a gruelling five-week tour, undermining his claims as a first-choice fly-half for some.

It is not an argument for which Hill has time, citing Australia great Michael Lynagh's early appearances outside Mark Ella as evidence of a world-class stand-off who began Test life in midfield.

Wilkinson himself made his first England appearance on the wing.

What is clear is that one of the best chances to stake an irresistible claim to a Lions place has come late in the selection process.

"In those key positions Warren Gatland has probably made up his mind, but that is not to say that you can't change it," adds Hill.

"It would need a big performance, but this weekend is the ideal opportunity because it is a European semi-final, a match of real magnitude."

Neither Hill nor King would be drawn on which Wilkinson or Farrell would earn their selection for a hypothetical final Lions squad spot.

When the final whistle blows at Twickenham on Sunday, will the man that matters, Gatland, have made up his mind?