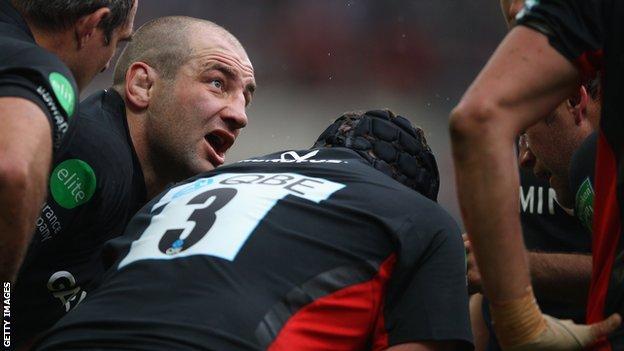 Saracens boss Mark McCall is hoping a 12-month effort to increase the power of his pack will come good in Sunday's Heineken Cup semi-final with Toulon.

"We were a little bit physically blown away in that game," said the Northern Irishman.

"He's a great player for them. He's instrumental to them," said McCall.

"It's not just about Jonny, it's about stopping Jonny being on the front foot.

"You can stop Jonny being on the front foot by doing other things well. You get at Jonny by getting at everything else. It's about how we stop them exiting with the ball with comfort."

"It was quite a stark day. And I think we're much better for that experience."

Toulon, like Clermont, will bring a strapping pack to Twickenham which includes powerhouse props Carl Hayman and Davit Kubriashvili.

Saracens will bulk up their options next season when new signings James Johnston and Billy Vunipola arrive from Harlequins and Wasps respectively.

But McCall and his coaching staff, having learned from the Clermont demolition, have been re-engineering the shape of their forwards in a bid to counteract the Toulon threat and reach a first Heineken Cup final.

"We weighed about 860kg in the pack that day, theirs was 900 and something. You either improve what you have or make some signings," said McCall.

"Mako Vunipola is still 120kg but his lean muscle mass and his body fat have changed. He's a much better, stronger, more powerful athlete than he was this time last year.

"There are a number of examples across the board. Even though he's injured this weekend, Will Fraser was an incredibly tough, brave, good player this time last year.

"But he was 99kg. We felt he was playing with one hand tied behind his back. He's worked unbelievably hard, changed his lifestyle, changed how he eats, sleeps and trains - and he's 107-108kg now.

"He's still brave, still courageous and still a good player. But now he can add a bit of punch to what he does. Across the board that has happened, so physically we are much better than we've ever been."