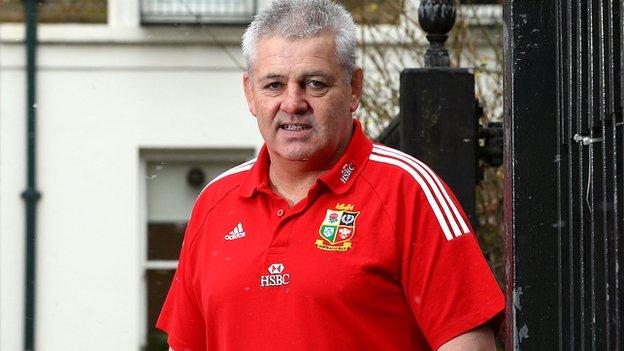 "Selection is just about opinion, and that's all it is," said Warren Gatland this week, days away from the most important selection of his coaching career.

If it was the British & Irish Lions head coach's way of saying 'don't take it personally' to the players who don't make his squad to tour Australia when it is announced on Tuesday, he is well aware of the intrigue this four-yearly event generates among the rugby community.

"We are not worried about who we are going to select - it is just who are we going to leave out?" Gatland added.

But what factors, apart from pure ability, may influence whether a player makes the final cut? Ian McGeechan, who has been on seven tours as a player and coach, two-time Lions captain Martin Johnson and Jim Telfer, a coach on the 1983 and 1997 tours, help provide some insight.

How important is a good mix of nationalities?

Gatland says he would feel uncomfortable if all four countries were not represented, given the Lions' history. "It just wouldn't feel right going on tour with players from only two or three countries," he said. It has never happened yet, and is unlikely to this time despite his concerns.

In the professional era, Scotland's representation has dwindled to the point where only two were picked by McGeechan in his original squad in 2009, even if that doubled by the time the party left. There are no shortage of candidates this year, even if ultimately only a handful of Scots may make the final party again.

There will also be considerable interest in the extent of the Welsh representation following their back-to-back Six Nations triumphs, and with Gatland returning to coach Wales after the tour. But it is not simply about rewarding countries based on relative Six Nations success, or lack of it.

"I think there will be a healthy Welsh contingent but I don't think nationality comes into it," says Telfer. "When they pick the squad they have to see through what happened in the Six Nations and take into consideration things like what the players have shown in the past, their previous Lions performances, and what type of player you want to take to Australia, where the grounds are usually firm and you are looking for ball players."

So what makes a good Lions tourist?

"You have to pick out the right people who can handle a Lions tour," says Johnson. "You need to know you are getting the right animals, guys who can perform in adverse conditions. They are going to be physically and mentally tired after a long year, but they have to forget about that.

"You have got to travel midweek and play midweek and do things differently to what you do when you play for your country. As a player, you have to ask yourself 'am I happy to be on the bench in midweek?' because you need everyone to be onside, pulling their weight, doing their job to the best of their ability to help the group win.

"You can't carry people; it is too difficult to win a Test series in the southern hemisphere as it is. Everyone wants to be in the Test team but it doesn't work like that. Some will have to sit on the bench, some will have to do other jobs. You have to be able to say 'right, this is the way it is and we are all in it together'. It only takes one or two individuals to disrupt that, and they might not even know it. You need to be strong, and you need to be together."

A little light relief doesn't go amiss, and four years ago in South Africa the likes of Wales number eight Andy Powell ("priceless…a real star of the tour" said fly-half Stephen Jones), Scotland prop Euan Murray, with his deadpan delivery of the 'joke of the day', and England wing Ugo Monye, with his personal travel guide to each new destination, all endeared themselves to the rest of the squad.

A player's ability to build relationships off the field, as well as on it, is also a necessary component. "Lions tours are as much a test of your social skills as anything else," said Wales wing legend Shane Williams, a member of the last two squads.

What is the likely make-up of the squad, position-wise?

Gatland has said he will probably take 36 or 37 players. Based on previous tours in the professional era, but taking Sir Clive Woodward's bloated 45-man party out of the equation, the squad is likely to consist of seven back-three players (two or three full-backs, four or five wings), five centres, two fly-halves, three scrum-halves, five props, three hookers, four or five locks and seven back-rowers.

Getting the right combinations

It is not simply a case of picking the best two or three players in each position, but also considering which players might work best in tandem with others, getting the right balance in each department.

"You have got to have an open mind as a Lions coach," says McGeechan. "That is by far the most important factor. You have got to see the possibilities that exist. Look at everything you have seen.

"Giving an individual player a mark out of 10 can be misleading. It is how he will interact with others that matters. It is the collective that makes a difference. It depends who or what is alongside someone as much as what is in them."

Any room for 'wildcard' selections?

Will Greenwood was the last uncapped player to be included in a Lions squad, in 1997. If Gatland was similarly inclined towards the adventurous, then Wasps' electric young wing Christian Wade would represent a spectacular 'bolter'.

While a core of senior players is essential, experience is not the be-all and end-all. Simon Taylor and Jason Robinson (2001), Ollie Smith and Andy Titterrell (2005), Keith Earls and Leigh Halfpenny (2009) all got the call with barely a handful of caps to their name. Ireland's Simon Zebo or Craig Gilroy could fall into the same category this time.

Then there is the grizzled veteran, not necessarily playing for his country, but a character the coach feels will have a positive impact on the squad. Munster's Alan Quinlan was inked in for that role by McGeechan four years ago before a pre-tour suspension scuppered his plan. Harlequins' Nick Easter has been touted in some quarters, though quality Test number eights are not in short supply.

"I think it would be a good idea to have someone from outside the Six Nations, maybe someone playing in France, or someone not getting into the team for their country," says Telfer. "In 2009 a couple of young guys like Earls and Halfpenny came up to the mark quite late on. Then you have guys coming back from injury like Tommy Bowe. If he is fit and in form, he would be a certainty."

Wales flanker Dan Lydiate might be another, though just four games into his return from a broken ankle, would he represent a gamble in an area where Gatland is already overrun with options?

And how do you pick the captain?

Leading the Lions is regarded as the greatest individual honour a player from the British Isles can achieve. Most squads contain several players who have led their countries, so leadership should not be an issue.

O'Connell's return to fitness and form makes him a safe bet for selection, which in turn makes him a strong candidate for the captaincy again. "Paul is a great bloke and an inspirational skipper, and was a great leader of the Lions," recalled Stephen Jones, the Test fly-half in 2009. "He is a magnificent speaker, and drew us all together as soon as we met up. His speeches about the responsibility we had for the Lions jersey, each other and ourselves were truly inspirational. He was a class act."

O'Driscoll has also done the job before of course, in 2005, so if it is not O'Connell or O'Driscoll, then bookies' favourite Sam Warburton or whoever else might get the job will not be short of advice.

The preference is for a player certain of his place in the Test team, although a coach also has to guard against sending out the wrong message to the rival or rivals in the captain's position.

"It would also be wrong to choose a guy who is maybe certain of his place but who wouldn't necessarily be a good captain," adds Telfer. "The captain has to have leadership qualities that extend right across the four nations. He has to make sure everyone in the group feels they have a chance of getting a Test place and is someone the players trust to speak for them."

This year's Lions captain will at least be afforded the privilege of knowing his selection before the other players. The remainder of the party will only know at the same time as Gatland informs the rest of us.