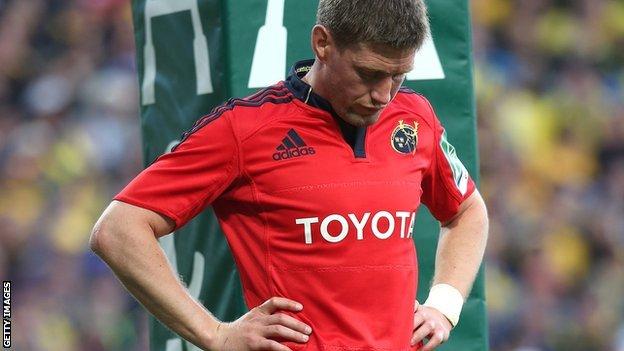 Ronan O'Gara said Munster's defeat by Clermont Auvergne in what may be his last Heineken Cup appearance was "extremely hard to take".

Munster battled all the way before losing their semi-final 16-10.

"It was a fantastic occasion to be part of but the only reason you play is to win - we could have snuck it at the end," said the 36-year-old fly-half.

On possibly retiring he said: "I don't know, today's not the day to be thinking about it."

O'Gara, the tournament's all-time leading points scorer, insisted it would be "disrespectful" to his team-mates to focus on himself.

But he admitted: "I will sleep on it until the end of the season and then make a decision."

It was a pulsating encounter in Montpellier as Clermont reached their first ever Heineken Cup final, in which they will play the winner of Sunday's match between Saracens and Toulon.

Clermont were the better team for the first 50 minutes on Saturday but Munster gave them a major fright as the Irish province launched a ferocious second-half fightback.

In the end, despite a couple of near-misses, Munster could only conjure a solitary try as the two teams fought out a thriller in front of 32,900 fans on the Mediterranean coast.

"It is an unbelievable competition, the craic and atmosphere are as good as it gets in rugby," said O'Gara.

"The memories I have of this competition make you appreciate what rugby can offer.

"There is serious resilience in this team and I am proud to be part of it. We are growing and we will get better as a team but we probably gave them too much of a start.

"They were dead after 60 minutes but we gave it our all and showed a lot of character. It is difficult to accept but we move on."

Munster captain Paul O'Connell said he was "very proud" of the way his young side performed.

"Some days, like the one we had at Harlequins [in the quarter-final], it feels like everything is going for you. Today was the other way round - we just couldn't get anything going," he said.

"We made a sluggish start with our physicality and our execution, and you can't do that against good sides.

"In the second half we had our opportunities and didn't really take them. We got a good try but we had plenty of other opportunities when we were five or 10 metres from their line.

"That failure to convert them when we were in the zone, and giving them that leg-up at the start, really killed us."