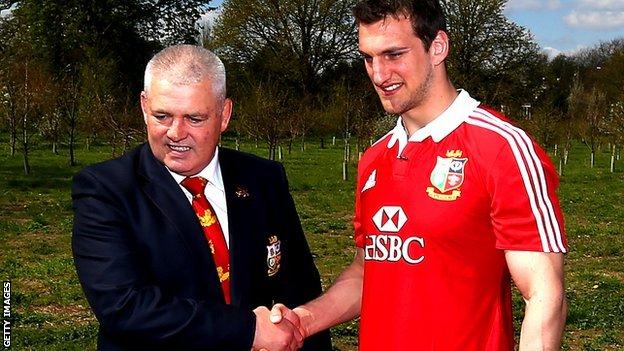 Lions coach Warren Gatland says his team for the first tour game against the Barbarians in Hong Kong is likely to be dominated by Welshmen.

At least 11 of the 15 Wales players selected in the squad are likely to be available for both pre-tour training camps to be held in the coming weeks.

But Lions in the Premiership or Pro12 finals will miss at least one camp.

"The team that plays against the Barbarians will probably be the best prepared," said Gatland.

"It will probably have a lot of Welsh players who are not involved in semi-finals and finals, who have been to most of the camps we have had.

"Some of those not involved in club matches are probably going to be a bit more prepared than others and the guys coming in later are going to be at a bit of a disadvantage in terms of getting up to speed."

The Lions will hold two training camps, the first at Wales' Vale of Glamorgan base from 14-17 May, and the second in Dublin from 20-24 May, before leaving for Australia on 27 May.

With Premiership and Pro12 semi-finals taking place over the weekend of 11-12 May, and then a week's break before the domestic finals on 25 May, it is hoped as many of the squad as possible will be allowed to attend the first camp.

But the six-strong Leinster contingent will be preparing for the Amlin Challenge Cup final against Biarritz on Friday, 17 May.

And players involved in domestic finals on 25 May will miss the second training camp, which is likely to feature more specific rugby preparation following the initial gathering in Wales.

Unless the Ospreys, who visit Leinster on Friday in the final match of the regular Pro12 season, can leapfrog the Scarlets, who are four points ahead and host Treviso, for the final play-off spot, then the five-strong Ospreys contingent will also be free to attend both camps.

Bayonne's Mike Phillips should also be available, as will Sale lock Richie Gray, but Gethin Jenkins will be preparing for the Heineken Cup final on 18 May with Toulon.

Although selection for the first game in Hong Kong will be hampered by the amount of preparation some players have had, Gatland insists all of the squad will get a fair chance to stake a claim.

"All of us might have an idea in mind of what the Test side might look at the moment, but I am sure when that first Test comes around it will be different," he added.

"They are all going to get a start in the first three games and have a chance to put their case."