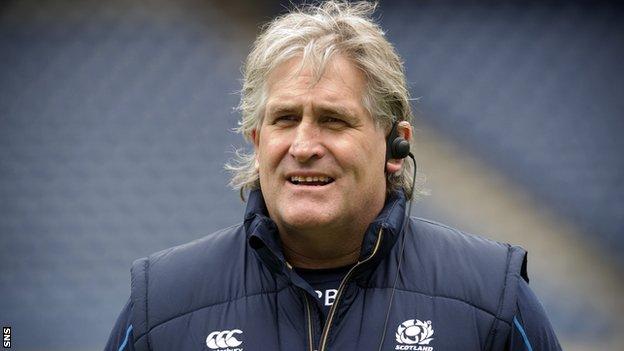 Scotland could soon have a new head coach, after interim boss Scott Johnson agreed to become director of rugby.

The Australian, who coached Scotland to a third place in the Six Nations Championship, will remain as head coach until his successor is named.

Johnson had been in temporary charge of the national side since Andy Robinson resigned last November.

The SRU said they were confident Johnson's successor would be appointed in "the next few weeks".

Director of Communications Dominic McKay told BBC Scotland that the shortlist for the head coach position had been whittled down to "three or four names."

McKay also stated that both the new forwards coach Jonathan Humphreys, who was appointed earlier this week, and Johnson would be "very comfortable" working with the new head coach.

The director of rugby job excites me. It's about making a really positive contribution that will stand Scottish Rugby in good stead for years to come.

Johnson, 50, joined the Scotland staff under Robinson as attack coach before taking on the role on an interim basis following Robinson's departure.

"I've really enjoyed working with the players throughout the past year and I'm looking forward to that continuing with our quadrangular tournament in South Africa next month," Johnson said.

"The director of rugby job excites me. It's about making a really positive contribution that will stand Scottish Rugby in good stead for years to come and I am looking forward to the challenge of the new role as well as continuing with the Scotland team.

"There are some big areas such as coach development, player development, sevens and player acquisition, where, working with colleagues throughout Scottish Rugby, I want to do my bit to ensure we make best use of the talents we have to take the game in this country forward."

Scottish Rugby's Chief Executive Mark Dodson had earlier said it would cast the net wide in search of a new head coach.

"It's imperative that we get the right candidate as head coach of the national team to take us to the 2015 Rugby World Cup and Scott and I are working together on this and have thought long and hard about the best solution and people for Scottish Rugby to continue to head in the right direction," said Dodson.

"Johnno (Scott Johnson) has been a popular coach with the players, as underlined by our third place finish in the most recent RBS Six Nations Championship.

"As he's said he enjoys hands-on coaching and his reputation in that role has been enhanced by his work with the Scotland team.

"But he also has other qualities in abundance that we wish to utilise and it was a decision that was made by both parties to get the best structures and systems in place to take Scottish rugby forward.

"The director of rugby is a hugely important appointment, one that is absolutely integral to Scotland's standing on the world stage in the next decade and beyond."