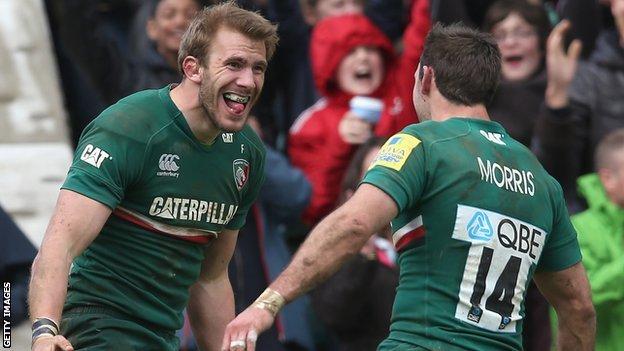 Leicester blew away Harlequins with a stylish second-half display to reach a ninth consecutive Premiership final.

Quins looked to be going into the break with a narrow lead, Nick Evans kicking three penalties to Toby Flood's two.

But Leicester took advantage of a Quins turnover on the brink of half-time when Vereniki Goneva finished superbly.

It proved the catalyst for a Tigers resurgence, with Niall Morris, Tom Croft and Mathew Tait crossing before Ross Chisholm added a consolation.

It means Leicester will have the chance to secure a 10th top-flight title and end three years without the Premiership trophy in their possession at Twickenham on 25 May, when they will face the winner of Sunday's semi-final between Saracens and Northampton.

They did it by overpowering the reigning champions Harlequins who, without the inspiration of injured England captain Chris Robshaw, would have had to become the first visitors to win a semi-final at Welford Road in 15 years if they were going to defend their crown.

But Conor O'Shea's side have proven troublesome for the Tigers recently, winning their past three encounters, including last year's final and a trip to the East Midlands at the beginning of the season.

And Quins started with confidence, pressuring the hosts quickly and forcing yards from the boots of Danny Care and Evans.

Leading 6-3 from two Evans penalties, they almost landed the first try of the afternoon, Care collecting the ball from a ruck and diving for the line, only to be stopped by a superb last-ditch tackle from Croft.

Care himself had to be equally alert at the other end, cutting out Flood's kick that looked destined for the path of the onrushing Goneva.

Leicester have reached the play-off final nine times, winning four and losing five. They are currently on a two-game losing run in the Twickenham showpiece game, having lost to Saracens in 2011 and Harlequins last year.

All but three of the 12 Premiership finals have involved the Tigers.

But the Fijian wing was not to be denied and, after Evans and Flood added a further penalty each, he knocked the wind out of Quins in first-half injury time.

Harlequins opted to keep ball in hand rather than boot the ball into touch to end the half, and were turned over at a ruck. Tigers swiftly moved the ball left to release Goneva, who brushed off Tom Williams's challenge to touch down under the posts.

Flood converted to give Tigers the lead from a half they had struggled to get to grips with.

It was as good as it got for the champions, who were never within touching distance of the hosts in the second period.

Flood kicked another penalty before Care, superb in the first half, was sin-binned harshly for what referee Greg Garner deemed a deliberate knock-on.

And with Care poised to come back on, Manu Tuilagi powered through a Quins tackle before passing inside to give Morris the easiest of finishes.

The contest was essentially over when Croft took a pass on the right flank just inside the Quins half and showed sensational pace to accelerate away from the cover to score.

England fly-half Flood missed the second conversion attempt but Leicester's lead became unassailable when Morris and the outstanding Tait combined on the wing to send the latter through for the score.

Quins, who won a maiden title last season, showed fight until the end and were rewarded when Chisholm profited from tidy work by Williams to add a late try.

But Leicester's dominance will have caught the attention of their potential Twickenham opponents and could set up a repeat of the 2011 final, should table-toppers Saracens overcome Saints on Sunday.

"I am delighted with the performance. The (Goneva) try before half-time was crucial for us and I thought across the board the players were outstanding.

"So much work goes into the season across the board, from top to bottom, and to get to a final - which we have got to win - is great for the club.

"We have switched off a couple of times against teams in the second half this season but we knew we couldn't switch off the gas today.

"The club is steeped in history in terms of getting to finals. Getting through the semi-final is an achievement but the main goal is picking up silverware at the end of the season."

"In the second half Leicester were absolutely outstanding, but I will have nothing but admiration and pride for the way we came up here and tried to play.

"We didn't go into our shells - we gave it our best shot - but in the second half it was an absolutely magnificent performance by Leicester.

"I thought we played pretty well today. We just came up against a force in the second half that played at a level we couldn't match.

"We knew it was going to be ferocious. We probably took them by surprise in the first half the way we went about our business, and I don't want people to forget just how well we played in that first 40 minutes.

"But they just ramped it up. They were brilliant today, they were like rabid animals at times the way they were going into it, and sometimes you lose composure away from home.

"If we had played like we did in the first half against the majority of teams then we would have been out of sight and over the hill at half-time."