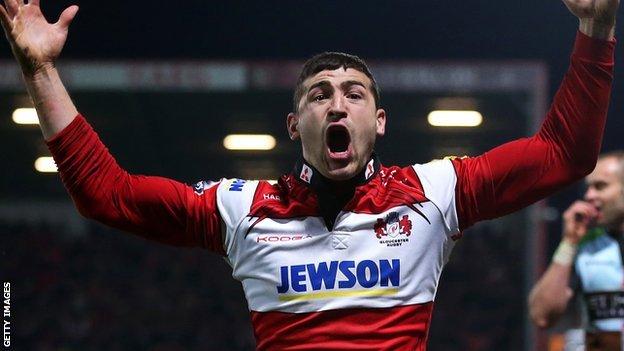 Gloucester wing Jonny May has described his call-up to the England squad as a "great achievement".

The 23-year-old is one of 11 uncapped players in head coach Stuart Lancaster's youthful party for the summer tour to Uruguay and Argentina.

"I means a huge amount to me, I almost can't describe it in words.

"I can't talk too much as I haven't been capped yet, but the possibility of being involved is a great achievement," May told BBC Gloucestershire.

"I've been playing rugby since I was five and it's been a long journey. The job isn't done yet, but it means a lot to me and my family, especially my Dad."

Swindon-born May came through the academy system at Kingsholm and broke in to the first-team in the 2010-11 season.

Having previously played for England Saxons, he caught the eye of the senior side's coaching staff this term by scoring 10 tries in 16 appearances,

"I thought I had a chance, but you can't listen to everything," said May, who signed a new deal with Gloucester in December.

"I've tried not to pay too much attention to it because if you worry about that stuff then it's not going to do you any good on the pitch.

"I've tried to keep my head down and work hard to improve my game."

May admitted he thought he was the subject of a prank when he received the call from England's attack coach Mike Catt.

"I lost my phone recently, so I don't have any contacts," he explained.

"I got a phone call from Mike Catt and I didn't have his number stored, so it was quite embarrassing when I had to say: 'who is this?'.

"I thought it might have been [team-mate] Jimmy Cowan winding me up but it wasn't."