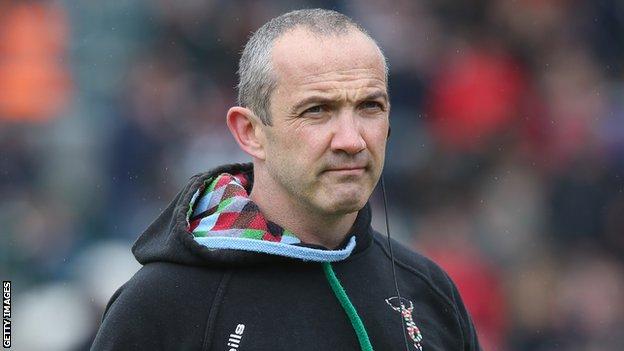 Harlequins director of rugby Conor O'Shea is proud of his side despite failing to make the Premiership final.

Quins' hopes of defending their title ended when they lost Saturday's semi-final 33-16 to Leicester Tigers.

O'Shea told BBC London 94.9: "I am incredibly proud of the way this team has gone about defending the title.

"I won't let anyone give anything but credit to what we have done. We have won more games this year than last year. We just haven't won the big one."

Quins finished third in the Premiership table this season, having won the title last season by beating Leicester.

O'Shea feels his players have dealt well with being the reigning champions this season.

"It's our title and we've lost it. We've worked hard all season to try and defend it," he added.

"We've won something this year in the LV= Cup, got to the quarter-finals of the Heineken Cup and the semi-final in the Premiership.

"Every single team raise their levels against you and they keep on coming.

"I remember speaking to Leicester coach Richard Cockerill at the start of the season and he said that expectation is an incredible thing.

"Once you win like we have, with three trophies in three seasons, the levels that people expect from you change.

"I am proud of the way we dealt with that."

Harlequins were 13-9 down at half-time against Leicester at Welford Road and O'Shea feels his side paid the price for failing to capitalise in the first half.

"We got to the semi-final and we gave as good as could in the first half," O'Shea said.

"We didn't have the lead we felt we should have going into the break, given the way we played, and in the second half the momentum shifted inexorably towards Tigers.

"That unfortunately is the way rugby is and when you are away from home it is hard to wrest that momentum back.

"There are things we will have to learn as a group to become better at but that is for another day.

"We'll dust ourselves down, enjoy the off season and we'll come back to try and win it again next year."