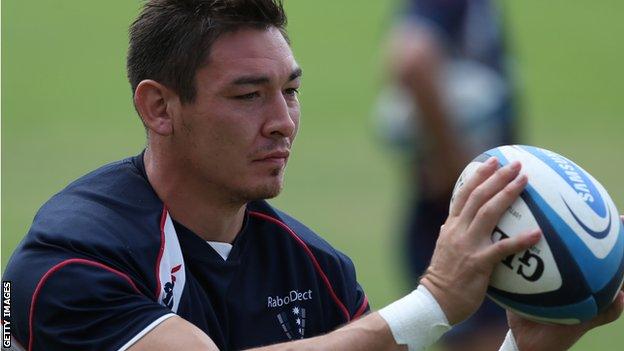 Wales forward Gareth Delve will end his three-year stay with Melbourne Rebels at the end of the Super 15 season.

Delve has captained the Rebels this season, the first non-Australian to officially lead an Australian Super Rugby team.

The 30-year-old back row signed a one-year extension to his contract in 2012.

"Gareth has been an inspirational leader since he arrived from the UK in 2010," said Rebels chief executive Rob Clarke.

"We all know the impact Gareth has had on the rugby field, but what many people don't realise is the significant impact he has had within the Victorian rugby community, travelling throughout Victoria promoting rugby, visiting schools, clubs and local charities."

Delve became the first Welshman to play Super Rugby when he joined the Rebels from Gloucester after rejecting an offer from Cardiff Blues.

The 11-times capped forward, who talked to Toulon over a possible move to France last summer, has been as one of the Rebels' most consistent performers since his arrival.

He won the Rebels' Rod Macqueen Pursuit of Excellence Award as player of the season for 2012 and was then given the honour of captaining the side for the following season.

His final game is set to be at home against Otago Highlanders on 12 July, while he could also face the touring British and Irish Lions on 25 June.

"He has won some prominent awards in his time here at the Rebels and will be remembered as one of the greatest players to wear the five stars [club logo]," said Rebels coach Damien Hill.

Delve played for Wales against ACT Brumbies last summer after being called up as an injury replacement.

Reports in Australia suggest the Cardiff-born player will move to Japan to continue his club career.