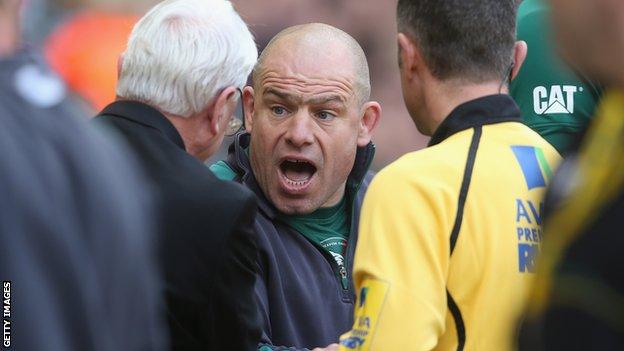 Leicester boss Richard Cockerill has said Northampton need to "take a look at themselves" after the Tigers won a record 10th Premiership title.

Saints director of rugby Jim Mallinder was angered by Cockerill's touchline antics during Saturday's final, in which Dylan Hartley was sent off.

The East Midlands rivals have been involved in fiery clashes previously.

Cockerill said: "When they were making comments about me, maybe they should look at themselves a bit."

How Northampton decide to behave is up to them, because my players weren't accusing other players of anything or hitting people late. Leicester were very disciplined and thus got their rewards

The Leicester director of rugby rushed down from the stands to pitch-side in the first half following a late tackle by Courtney Lawes on Toby Flood.

The Tigers and England fly-half had to come off with concussion shortly afterwards.

And Cockerill, whose side picked apart the gutsy 14 men of Northampton in the second period to win 37-17, suggested Hartley's red card for swearing at referee Wayne Barnes and accusing the official of cheating was a sign of Saints' ill-discipline.

Hartley, who could now miss the forthcoming British and Irish Lions tour through suspension, has said his comment was aimed at Leicester's Tom Youngs.

"How Northampton decide to behave is up to them," said Cockerill. "Because my players weren't accusing other players of anything or hitting people late. Leicester were very disciplined and thus got their rewards.

"I didn't ask anybody to hit anybody late. I didn't tell someone to swear at anybody."

Some might say he intimidates officials, I don't think he probably does. But that's Cockers

And Mallinder, who has previously expressed his frustration with Cockerill's vociferous relationship with officials from the sideline, was once again less than impressed with his opposite number.

"Cockers is Cockers isn't he? He likes to get into your face. He jumps down to the touchline and that's the way he is," said Mallinder, whose side were featuring in their first Premiership final.

"Some might say he intimidates officials, I don't think he probably does. But that's Cockers.

"For a neutral it was a very good game of rugby. I was proud for Northampton and proud of the performance."

Cockerill, who secured his fourth top-flight title since joining the Leicester coaching staff in 2005, also believed Lawes' challenge on Flood was worthy of a card.

"I was saying to the fourth official surely we need to go to the television match official," he said.

"It's clearly foul play, a penalty is given and you've broken an international fly-half. For me it's a yellow card or potentially more.

"It's OK to hit players late and OK for players to leave the field concussed, is that what we're saying? I'm protecting my players."