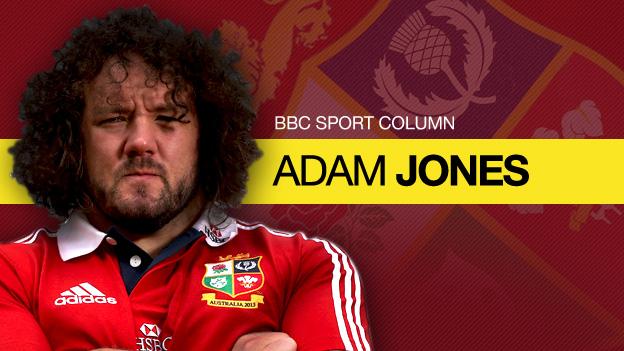 In the first of a regular series of columns for BBC Sport, British and Irish Lions prop Adam Jones provides a look behind the scenes of the Lions' tour of Australia.

That's pretty much what the average day has been like with the Lions so far as we prepare for the tour to Australia.

Getting up at 6.45am for the first session of the day in the portable cryotherapy chambers, which subject you to temperatures as low as -160C and speed up a player's physical recovery, is a bit of a shock to anyone who has not experienced it before.

But all the Welsh boys in the squad are used to them from our camps in Poland. Once you do 10 sessions, the theory is that a couple of weeks later your body will be feeling loads better.

The lads who are younger and faster than me swear by them, but I do feel fresher now and most of the niggles from the end of the season have gone.

It's been a brilliant couple of weeks with the squad, even if was a bit strange with only 22 or 23 of us, with the other players joining up after their club finals. Everyone has gelled really well, on and off the field, and the coaches have been excellent.

The first day we met up in London we had to make sure we'd got all the right kit. There's a hell of a lot: six sets of Adidas training kit, eight T-shirts, a couple of pairs of shorts and tracksuits, a jacket to wear to the stadium for the anthems, two Thomas Pink blazers, six shirts, two pairs of shoes, underwear, you name it. Just as well we don't have to check all that in ourselves.

I was rooming with (England prop) Mako Vunipola during our first week down at the Vale of Glamorgan base we use with Wales, and I can confirm the rumours are true. He is a phenomenal snorer. I snore myself but I'm not a particularly deep sleeper so with Mako barely three feet away from me, the ear plugs were well and truly wedged in.

He's a lovely lad though. At 22 he's one of the younger ones in the squad, but has spent a lot of his life in Wales so we had a bit of a connection straightaway.

For our second week in Dublin I managed to get my own room. I think I was supposed to be sharing with Gethin Jenkins, but he was still involved with his club Toulon, so at least I didn't have to spend a week with the grumpy one. But it will be the same policy as the last tour in 2009 where we shared with someone different each time we changed hotels. It means you get to know people better.

We did manage to get out for some dinner together one night last week. We went to Jamie Heaslip's restaurant in Dublin. Let's just say there was a lot of meat eaten. It was a good chance to have a chat with everyone away from the hotel and training field.

Our first camp was probably around 70% fitness work - power, endurance, conditioning. At this time of the season there's not so much need to be running around; it's more grappling and pushing and strength work.

But on the Friday we trained against the Welsh squad who are preparing for their tour of Japan. It was good to have some live line-out practice. Everyone was getting used to the new calls and by the end of the week you could see it was getting better.

We had briefings initially where the coaches outlined how the defence and attack are going to be set up and then we added bits as the week went on.

The coaches gave us a rundown of what we would be working on in each afternoon session, and the onus is then on you to get on your laptop and swot up. It is your responsibility to get up to speed, so you get it right first time when you get on the field.

Lions head coach Warren Gatland wants us to train as close to match intensity as possible with short, sharp sessions, and our analysts spend a lot of time preparing us for them, with different moves and calls, so everyone is pretty clued up.

There was obviously a familiarity working with a lot of Welsh boys, but there are a lot of different calls and everything has changed from what we do with our countries.

You can see in the weights room how the level of intensity goes up with the Lions. Everyone is trying to push a few kilos more. The likes of Dan Lydiate, George North and Sam Warburton are freaks in that area, but [Scotland lock] Richie Gray has impressed me. He is such a tall lad but phenomenally strong, dead lifting 200-odd kg straight off the floor. That is a fair old weight for someone who's 6ft 10in and he is obviously very athletic too.

Rugby-wise, (England fly-half) Owen Farrell is 21 going on 30. He obviously has a good understanding of the game and is very vocal. I am looking forward to playing with him.

Owen and I were one of five players - along with Paul O'Connell, Richie Gray and Sam Warburton - who got to choose which players will be on which committees throughout the tour. There are about eight - entertainment, laundry, joke of the day, announcements on the bus, tour guides, music for the bus, etc - and I didn't put myself on any of them!

I'm not sure how Owen managed to end up on the laundry committee but the youngest guys usually get that job. I remember when I started, myself and Gethin had to do it - collecting, taking it to the laundry, sorting out any problems. Thankfully there aren't too many in the sort of hotels we stay in.

We left camp on Thursday and spent a few nights at home before returning to London on Sunday for a bit more training and then the farewell dinner. It's going to be hard to be so far from my amazing wife and two-year-old daughter. But they are coming out with my parents and in-laws for the last three weeks of the tour, which will make it 10 times easier knowing I will see them halfway through.

I had to make an emergency trip to the dentist while I was home. It was nothing to do with my teeth though. I lost my gumshield. I think I put it in my car after my last game for the Ospreys and it's disappeared.

So I had to get my mouth measured up to get a new one fitted, so they can send it out to me. A bit of a pain but probably just as well as I only had one spare, so I need some new ones.

This will be my first visit to Hong Kong. I don't know why I haven't been invited out to play in the Sevens before, but obviously I would love to start the first match against the Barbarians on Saturday.

Games like this don't come along very often. We are just looking forward to flying out now and getting on with the tour.