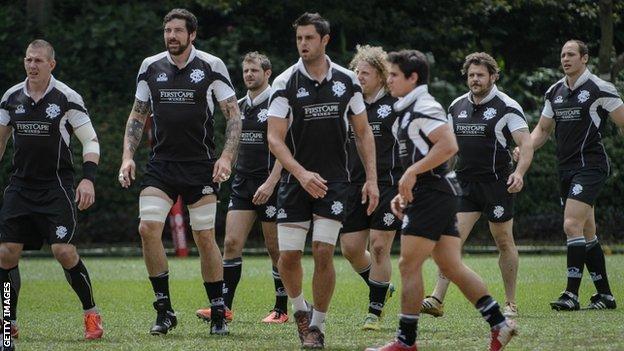 The British and Irish Lions will face a Barbarians side captained by Italy number eight Sergio Parisse in their tour opener in Hong Kong on Saturday.

There are also starts for uncapped Wasps pair Elliot Daly and Sam Jones.

Coach Dai Young, three times a Lions tourist himself, insists his much-changed side will be far more motivated and focused than the one beaten at Twickenham on Sunday.

"We are not going to shy away from the fact that we all felt let down afterwards," he said. "We didn't play anything like we expected and we know we are going to have to be a lot better.

"The players realised themselves that they have to step things up this week, and preparation and training has been spot on.

"We have been concentrating on getting the basics right and earning the right to play rather than just going out there to chuck the ball around."

Such is the Barbarians' desire to atone for their lacklustre effort at Twickenham, the players have decided to refrain from alcohol until after the match.

"They know that if they don't look after their bodies in this heat, they will have a problem," said Barbarians manager Derek Quinnell.

The Lions have only played the Barbarians on one previous occasion. In a special event held at Twickenham to celebrate the Queen's Silver Jubilee in September 1977, a Lions team including current tour manager Andy Irvine won 23-14 against a Baa-Baas side featuring Welsh legends JPR Williams, Gerald Davies and Gareth Edwards.