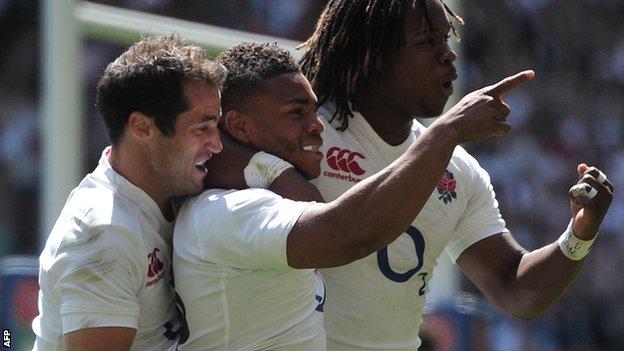 England will hand seven players their first starts when they play a South American representative side on Sunday.

England face the Consur XV in a non-cap game in Uruguay, before Tests against Argentina on 8 June and 15 June.

"This tour is about giving players opportunities to show their talent," said head coach Stuart Lancaster.

"The players understand this responsibility and are looking forward to the challenge.

"Everyone involved will need to hit the ground running in Uruguay because we expect the Sudamerica side to play with a lot of skill and physicality in front of a passionate home crowd. It is England's first ever match on Uruguayan soil and should be a great occasion for all concerned."

Centre Burrell and fly-half Myler come into the side eight days after being part of the Northampton team beaten in the Aviva Premiership final.

Eastmond (Bath Rugby), Myall (unattached), Thomas (Sale Sharks) and Vunipola (London Wasps) all came off the bench in England's 40-12 win against the Barbarians on Sunday.

Replacement hooker Rob Buchanan (Harlequins) will make his first appearance should he be used from the bench.