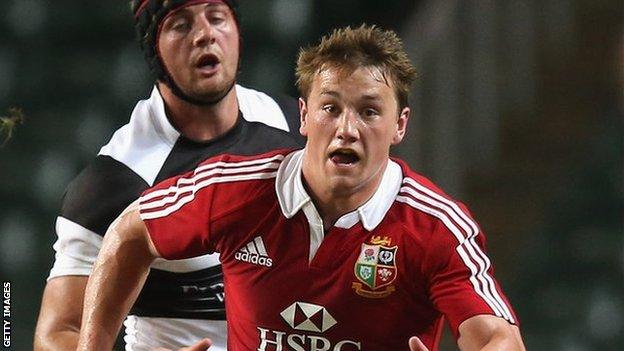 I have begun to feel more like a poor man's Derek Brockway, the BBC Wales weatherman, this week, than a rugby reporter, as virtually all of my despatches began with an admittedly, rudimentary weather report.

No isobars or pressure charts for me; just the words "ridiculously", "hot" and "humid" being endlessly recycled with increasing desperation.

Imagine what the players must have felt like? Baa-Baas coach Dai Young didn't mince his words when he told me: "It's us fatties that suffer the most."

But when I put it to Jonathan Davies - as diplomatically as I could - that some players might be coping better than others, he said they were all struggling.

Some apparently lost as much as four kilograms in weight after the first energy-sapping training session. I imagine bottled water sales at the Grand Hyatt Hotel went through the roof.

The Lions management and indeed the Lions doctor, James Robson, has suggested that this ordeal will actually be beneficial to the squad in the long run, the logic being that if they can survive this, they can survive anything.

But the conditions have led many to question the wisdom of the decision to hold the fixture in Hong Kong.

The Lions can claim to have spread the rugby gospel to an isolated outpost, but ultimately money, rather than missionary work, talks.

The millions that will have poured into the Lions coffers as a result of the stopover, is arguably the main reason it was given the green light.

Dissenting voices in the local media have also pointed out that if the purpose of the fixture was to help grow the game, then why was local poster-boy Rowan Varty left out of the Barbarians match squad? His presence, they argue, would have pushed the attendance figures up, and helped engage the locals.

As match day dawned, the news declared that 1 June would be the hottest day of 2013 so far. The thermometer would nudge 35 degrees, and humidity levels would climb to nearly 100%... and water breaks had already been scheduled into the match.

Any notion that this was purely an exhibition match was dispelled early on, when Saracens team-mates Owen Farrell and Schalk Brits exchanged blows, leading to the latter's yellow card and subsequent ban.

But when Mike Phillips seized control of the game either side of half-time, it was over as a contest.

The Wales scrum-half - such an influential figure for the Lions in South Africa four years ago - set up the first try, and scored two of his own, wrapping up the man of the match award before the hour was up.

More tries followed. There were eight in total for the Lions, seven scored by Welshmen, and had Jonny Sexton knocked over the final conversion, it would have pushed the Lions through the 60-point barrier.

The reaction in the stadium afterwards was strangely muted, with some members of the press still questioning the validity of the fixture.

But make no bones about it, this was a Barbarians side loaded with international superstars, and the Lions not only endured the tough conditions admirably, but romped to a comprehensive victory.

Wallabies beware, the 2013 vintage are just beginning to sharpen their claws.