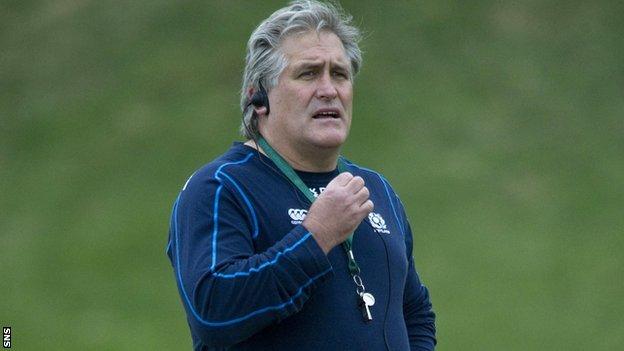 Edinburgh's Greig Tonks and Glasgow Warriors pair Alex Dunbar and Pat MacArthur will all make their debuts against Samoa in Durban.

"We want to broaden the base and it gives us the perfect opportunity to see how these guys stand up," said Johnson.

The Australian also maintained he would be using the four-team tournament, which also features hosts South Africa and Italy, as part of his planning for the 2015 World Cup.

"We have 25 Test matches available to us prior to the World Cup," said Johnson.

It is a good chance for them, but it is only a chance, and we are looking forward to seeing how they perform

"I've said regularly that we're not going to give Test jerseys away, but we cannot be exposed to injury issues come the World Cup and the best way to prevent that is to give players opportunities."

South Africa-born Tonks, 24, who moved to Edinburgh in 2012 and has one Scotland A cap to his name, is at full-back in place of Stuart Hogg, who is on Lions duty.

Centre Dunbar, 23, and 26-year-old hooker MacArthur have spent their entire careers at Glasgow and been capped for Scotland at under-20 level.

It will be Bath's Heathcote first Test start at fly-half after winning his only other cap as a late replacement against Tonga last year.

Johnson is anxious to have a look at all five players, but particularly Heathcote, who could be the long-term answer to the decade-old problem position.

"Tom showed a great deal of loyalty to us at a young age and this is a good chance for him," said the coach.

"Tonks is a left-footer and I have to see if his skills hold up at this level. Alex Dunbar's form at a regional level has been superb and he has earned that right.

"It is a good chance for them, but it is only a chance, and we are looking forward to seeing how they perform.

"We are going out to compete on all fronts, skill as well as physicality. If we get that right, we will do well."