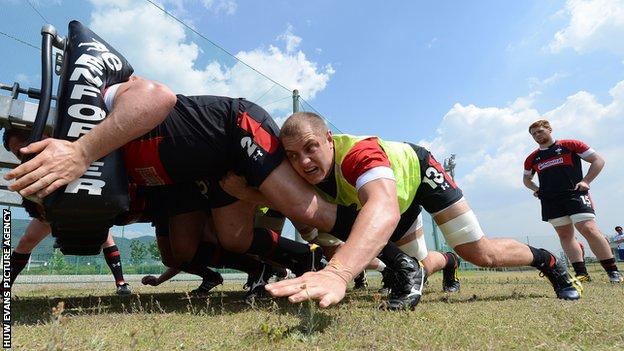 Uncapped James King says he is ready to fill the unfamiliar role of open-side flanker for Wales against Japan.

The 22-year-old Ospreys forward is more accustomed to playing in the second-row but is expected to wear the seven jersey in Saturday's first Test.

"I'd be more than happy to do it. I've said with the Ospreys that I'm happy to play anywhere," he said.

"As long as I'm on the field it doesn't really matter. I'd happily play on the wing if needed."

Josh Navidi from Cardiff Blues is the only specialist open-side flanker, but he was a late addition after an injury forced Aaron Shingler to miss the two-Test tour.

Shingler had been pencilled in to cover for the absence of Sam Warburton and Justin Tipuric, who are on the British and Irish Lions tour in Australia.

King, who was selected for Wales' Six Nations squad, has experience of playing in the back-row and interim Wales coach Robin McBryde is keen to see how he fares at international level.

"It was always an option in the back of my mind when we selected the squad," said McBryde. "By losing Aaron Shingler it's given us the chance to take a look at James.

"Josh Navidi wasn't far away, but James King and Rob McCusker have had experience in that position. They also offer something different in terms of their height. They've got strengths in other areas.

"We're just looking to provide a different threat that Japan are not familiar with."

King says Wales will be especially keen to dictate the pace of the game in Osaka on Saturday, where temperatures are expected to be sweltering hot for the mid-afternoon kick-off.

"We've seen footage of Japan and they'll run around all day so that's something we've got to manage," said the Australia-born forward.

"We'll have to step up to their level with that. The area we've got to beat them is with out physicality and set-pieces. If we dominate those areas then everything else will fall into place."

Wales' team to face Japan will be named at 04:00 BST on Thursday, with King expected to be joined by Emyr Phillips, Owen Williams and Dafydd Howells in earning a first selection.

Prop Craig Mitchell has already been ruled out with an ankle injury.