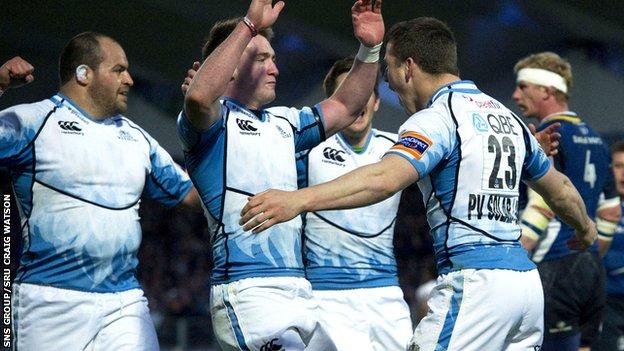 Gregor Townsend's side will also take on Cardiff Blues and Exeter Chiefs in Pool 2.

Edinburgh, who reached the semi-finals in 2011, are in Pool 6, along with Gloucester, Munster and Perpignan.

Glasgow, who were third in the RaboPro12, have never managed to progress to the knockout phase of Europe's premier tournament.

Townsend, who played in France with Montpellier, Castres and Brive, is looking forward to the campaign and believes the home match with Toulon will be a special occasion.

"Toulon have got a world class team and they've built a global reputation on who they've signed and the passion of their supporters, so I can't wait, it will be a cracking game at Scotstoun," he told the club website.

Physically, we need to be bigger and stronger than we were last season

"I've played at the Stade Mayol twice in my career and they were definitely highlights. It was an experience and atmosphere like no other at club level. The pitch is great, it's very quick, the weather is usually beautiful and the crowd are fantastic.

"You want to take on the best players in the world in the best environments you can play in.

"I have a bit of a soft spot for Exeter, my brother played for them and he still lives down there so I've tracked their progress very closely. They've built a fantastic club off the field and they've recruited very well.

"They've had their first year of European experience and will be much better for that. They almost beat Leinster away and were in a pool with Clermont so they'll have learnt a lot from those game."

"It's three teams who have proud home records but, if we can get our home performances right, we can move forward," he told his club's website.

"Physically, we need to be bigger and stronger than we were last season.

"This is the big stage. From the quarter finals through to the final, it's close to Test match rugby, that's how physical it is.

"The Heineken Cup is massive. It's such a great experience for players and staff."