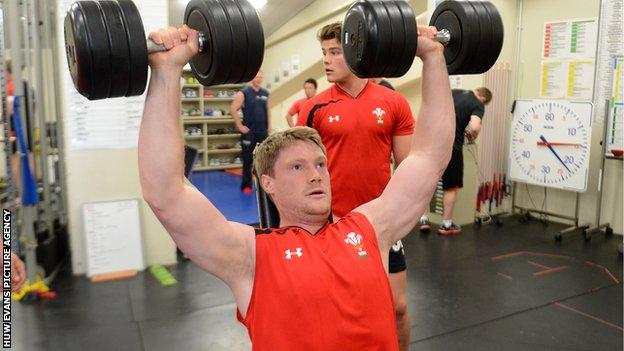 Jonathan Spratt is set to return to the Wales side for the first time in four years in Saturday's game with Japan.

The 27-year-old Ospreys centre made his international debut alongside Sam Warburton and Jonathan Davies on the tour to north America in 2009.

"It has been great to watch those guys go on, progress and win the Six Nations a couple of times," he said.

"As a Welshman, I'm proud of what they have achieved but it for me, it has been a tough time."

While Warburton and Davies have established themselves in the Wales team, leading to selection for this summer's British and Irish Lions tour to Australia, Spratt's career has stalled.

Injuries have forced him spend a significant amount of time on the sidelines, but a trouble-free season with Ospreys has resulted in a return to the international fold - once again in a Lions year while Wales' leading players are away with the cream of the home nations.

"I had to have a discectomy on my back where they shaved one of the disks, which kept me out for four months," said Spratt, who returned to Ospreys in 2012 after a year with London Irish.

"Then I underwent anterior-cruciate ligament reconstruction, which involved a couple of operations on my knee. In the end I was out for 18 months.

"It has been tough. I known it's all part and parcel of being a professional rugby player and unfortunately you have to take the lows as well as the highs.

"But all that kept me going was trying to get back playing, even though it took longer than expected."

If selected for Saturday's first Test in Osaka, Spratt will be one of the oldest players in the Wales side.

Andrew Coombs, at 28, is the oldest player in the squad and is expected to start, while four new caps are set to feature as Wales contend with having 15 players away with the Lions and other experienced campaigners rested.

"It's strange to be one of the senior guys at my age, but I have to help bring some experience to the younger guys while getting back to international rugby myself," Spratt said.

"The conditions are pretty tough here in Japan with the heat and humidity but we'll just have to deal with that and try to impose our style of game."

The team to face Japan will be named at 04:00 BST on Thursday.