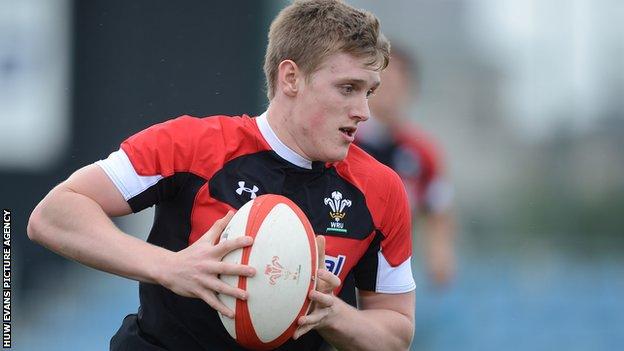 Wales have named four uncapped players to start in Saturday's first Test against Japan in Osaka.

Wing Dafydd Howells, centre Owen Williams, hooker Emyr Phillips and flanker James King will feature in a side with a combined caps total of 100.

Lock Bradley Davies, who has 38 of those caps, will captain the side for the first time.

Fly-half Dan Biggar is the only survivor from the team that beat England to win the Six Nations title.

Davies, Biggar and scrum-half Lloyd Williams are the only players to have reached double figures of appearances, leaving Wales to field their least experienced side of the professional era.

"It's a fantastic opportunity for the new caps and they know the importance of representing our nation," said coach Robin McBryde, at the helm in Warren Gatland's absence with the British and Irish Lions.

The Lions have also deprived Wales of 15 leading players, while Ryan Jones, James Hook and Paul James have been rested as Wales look to blood new talent.

Wing Howells enters the international stage having played just seven games of senior rugby - five with Neath in the Principality Premiership and two for Ospreys in the LV= Cup.

The 18-year-old, the youngest player named in Wales' squad, showed his promise with a classy try for Neath from the halfway line in the Swalec Cup final loss to Pontypridd in May.

Fellow debutant Williams, 21, will form a centre partnership with 27-year-old Jonathan Spratt, whose two previous Wales caps were on the 2009 tour to North America.

Once capped Harry Robinson is the other wing, with Liam Williams at full-back.

With Exeter prop Mitchell ruled out after arriving in Japan, new cap hooker Phillips (26) is between Six Nations squad members Ryan Bevington and Scott Andrews in the front row.

Captain Davies is alongside Blues teammate Lou Reed in the second row, while Dragons player Andrew Coombs, who played at lock for Wales in the Six Nations and is the oldest team member at 28, is at blindside flanker.

King will be in an unfamiliar role of open-side flanker for his first taste of Test rugby, with Rob McCusker completing the back row in his first start for Wales at number eight.

"The squad have really worked hard over the last couple of weeks and they are ready to get out and play," said coach McBryde.

Japan have made seven personnel changes and three positional switches after losing to Fiji for Saturday's game.

Japan have recruited former England lock Steve Borthwick to help in their preparations.