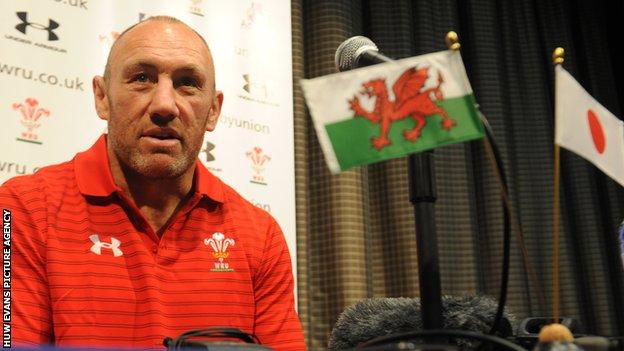 Wales caretaker coach Robin McBryde says his inexperienced side should not fear failure when they face Japan in the first Test on Saturday.

McBryde has named in a team with a combined total of only 100 caps for the game in Osaka.

But he is confident his young Welsh side will perform well at the Hanazono Stadium.

"[They should] just got out there and play the game - don't fear failure," McBryde said.

"We're highlighting lack of experience and conditions, [but] take all that out of the equation - we've got a good, solid group of men [who are] ambitious.

"We picked a young group of players for their qualities.

"It's what you do with experience that counts, really. We feel the potential within this group.

"We've given them an opportunity to grow, to lead from the front and as a group they've done that.

"As much as the players are looking forward to Saturday, we as a management are hugely expectant of the performance on Saturday.

"We're really looking for something special."

Wales travelled to Japan without almost 30 players either injured, rested or on tour in Australia with the British and Irish Lions.

"Dafydd Howells has got the one thing I was always envious of any player and that's speed," McBryde said.

"He's proven throughout the season how much of a threat he is in attack.

"Emyr Phillips is a hooker I've worked with in the past and if you speak with anybody from the coaching department in the Scarlets they won't have a bad word said about Emyr.

"He's been fighting for that hooker berth with Ken Owens all along and this is a deserved opportunity for Emyr.

"Owen Williams has proven on his appearances for the Blues how much of a threat he is.

"He is an invaluable member of the Welsh sevens squad as well, but in the 15-man game he's got a good physicality [and] defensively he's very strong.

"James King is one that impressed during the Six Nations with his attitude and manner in training.

"He really did stand out during the championship and [was] unfortunate not to get a little time playing.

"As a leader he's stepped up and he's highly regarded."

Defence coach Shaun Edwards had said Wales would ask for water breaks in Saturday's first Test against Japan to guard against dehydration.

But Japan coach Eddie Jones said he had little sympathy for Welsh requests, claiming southern hemisphere teams do not receive special consideration when they play in Europe.

The International Rugby Board said water breaks are allowed for player welfare purposes and were usually agreed between teams and match officials.

McBryde will speak to referee Lourens van der Merve about the matter but added he was not too concerned about getting water breaks during the game.

"We're not going to get preoccupied with it," the former Wales and Lions hooker said.

"If we're allowed water breaks, great. If not we've just got to get on with it.

"Watching the Lions' matches and some of the conditions they're playing in, you've just got to get on with. We're not making a big issue of it."