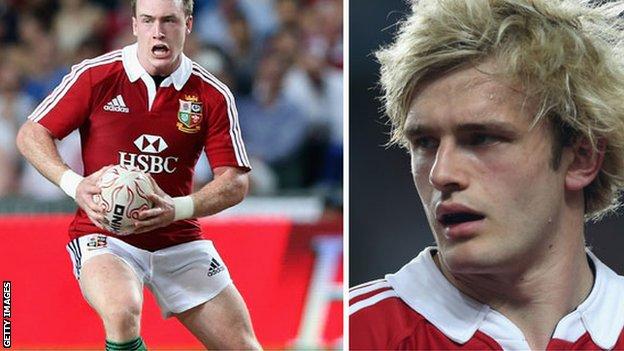 Two Scots will feature in the British and Irish Lions side against Queensland Reds on Saturday.

Stuart Hogg and Richie Gray, who played in the opening win against the Barbarians, both start in Brisbane.

Sean Maitland, who featured in the tour opener and came off the bench against Western Force, misses out.

Captain Sam Warburton will make his Lions debut after recovering from a knee injury.

The Welsh flanker, 24, missed the first two tour games but has now been declared fit to lead the side.

Wales prop Gethin Jenkins also gets his first outing of the tour after shaking off a calf problem.

Warburton missed the 59-8 win against Barbarians in Hong Kong on 1 June and the 69-17 victory over Western Force in Perth on Wednesday with a niggling knee injury picked up in training.

He said: "I wish the game was tomorrow really. Seeing the boys bringing their Lions jerseys back to the hotel after games has been tough, knowing they have that jersey to take home with them.

"I am just dying to get out on the pitch. It can't come quick enough."

Saturday's game is followed by three more warm-up fixtures before the Lions face Australia in the first of a three Test series.