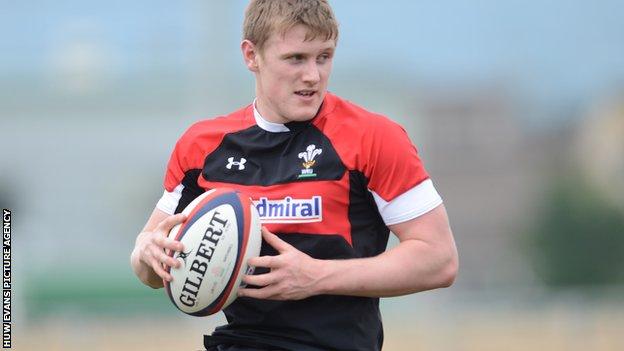 Wing Dafydd Howells has revealed he is catching up with college coursework during Wales' two-Test tour of Japan.

At 18 years old, Howells is the youngest player in the Wales squad and one of four uncapped players that will start Saturday's first Test in Osaka.

"I should be in college right now and I've actually brought college work out with me," said Howells, a student at Neath Port Talbot College.

Howells says his inclusion in the squad for the summer tour had come as a "surreal shock" and described it as an "unbelievable feeling".

He has been thrust onto the international stage with a mere seven games of senior rugby in his locker - five for semi-professional side Neath and two in a second-string Ospreys side.

"It's a huge thing for me. I never expected it to come so early in my career," Howells added.

"The boys have been really good and making sure I know what's happening with training and what I'm supposed to be doing in training. They've been really helpful.

"[In a] first senior international I think anyone would be happy enough to just get through it.

"But I think you need to put in a big performance to show that I'm here and ready to play."

Howells hopes to follow the example of Swansea City defender Ben Davies, who has made the most of an unexpected opportunity to establish himself in the Premier League and win his first Wales cap.

Davies, who was at school with Howells at Ysgol Ystalyfera, made his Swansea debut aged 19 after an injury to regular left-back Neil Taylor.

"He's doing exceptionally well for himself. It shows it can be done if you're given the chance," Howells said.

"It doesn't take much. One of the players was unlucky enough to have a nasty injury and he was lucky enough then to be called in and do the job, which he's done exceptionally well."