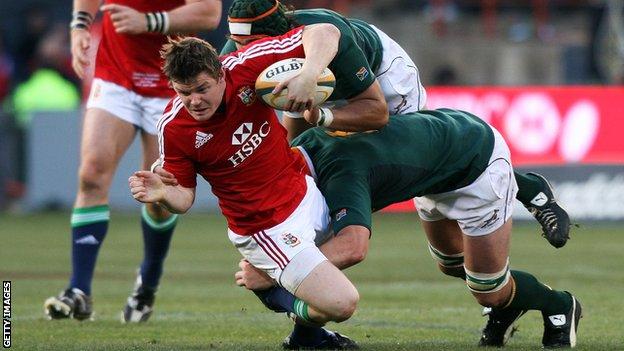 Australia coach Robbie Deans has hailed Brian O'Driscoll as "the ultimate competitor" and says his impact on the game is unprecedented.

Deans must devise a strategy to contain O'Driscoll during the British and Irish Lions' tour Down Under and the coach admits world rugby may never see his likes again.

"If he was here I'd say 'congratulations on a wonderful career'. It is something he will look back on with pride, obviously," said Deans.

"Many rugby players will try to emulate it, but not too many will achieve it.

"He is a hugely respected individual, the ultimate competitor.

"He is relentless. That's what test match rugby, in particular a Lions series, is all about.

"What he has done in the game is unprecedented."

O'Driscoll's British & Irish Lions career will be chronicled in a BBC Radio Ulster documentary this Sunday at 13:30 BST.

From a star-making debut in Brisbane in 2001 to his doomed captaincy against New Zealand four years later, the rugby great opens up about the highs and lows of his experiences with the British and Irish Lions in Brian O'Driscoll - Heart of A Lion.

Team-mates, coaches and opponents give their take on the man and the talent that fills rugby's most famous number 13 jersey.

"I've watched it on occasions," he admits.

"I get sent the link on twitter so I'll have a look at it here and there. I'm not able to do the commentary on it, I'm not that bad but I remember it pretty well."

"You don't get half a Brian O'Driscoll," added McGeechan.

"It doesn't exist. You get the whole package and I think that's what the players will enjoy playing around him."