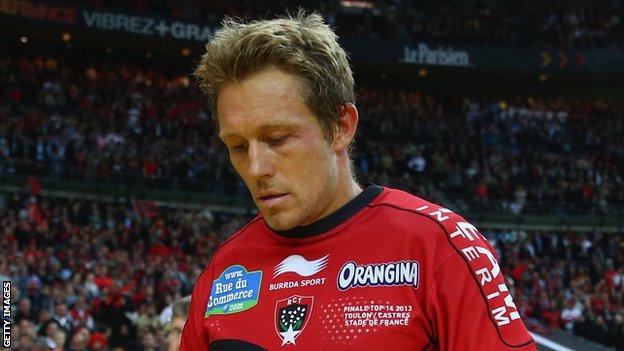 Jonny Wilkinson has effectively ended hopes of receiving a late call-up to the British and Irish Lions tour after having surgery on a groin problem.

Lions head coach Warren Gatland spoke to the former England fly-half to check on his availability before announcing his original squad.

He suggested Wilkinson, 34, may be a stand-by option once his club commitments with Toulon were over.

Jonny Wilkinson was involved in the Lions' Australia tours of 2001 and 2005, tasting series disappointment on both occasions. In total he scored 67 points in six test appearances against the Wallabies.

But the operation looks to have ruled out him out of the tour.

"I've just had a procedure on my groin, a little operation that will keep me out of action for a few weeks," Wilkinson told ESPN.

"I'd got to a stage where I wasn't able to train anymore and was going from game to game and suffering on the field because of that."

The Englishman turned down the opportunity to tour Australia with the British and Irish Lions in April to concentrate on the conclusion of Toulon's season.

Wilkinson helped the French team to victory in the Heineken Cup final against Clermont Auvergne at Dublin's Aviva Stadium, kicking 11 points in a 16-15 win as Toulon won a first major trophy in 20 years.

The 2003 World Cup-winner scored 17 out of 17 penalties in the quarters, semis and final of last season's competition and was recently was named European Player of the Year.

Wilkinson admitted that even if Gatland were to contact him now, the chances of him being able to answer a call to go to Australia are remote.

He added: "We've also just finished a 48-week season and now I'm looking forward to the other four weeks and trying to rest up so I can do it all again next season.

"I'm now going to try to make sure I get back to some sense of fitness and I am far from 100% at the moment.

"If that situation did ever come about there would be a discussion to be had, and I would be very proud to be asked, but it is unlikely."