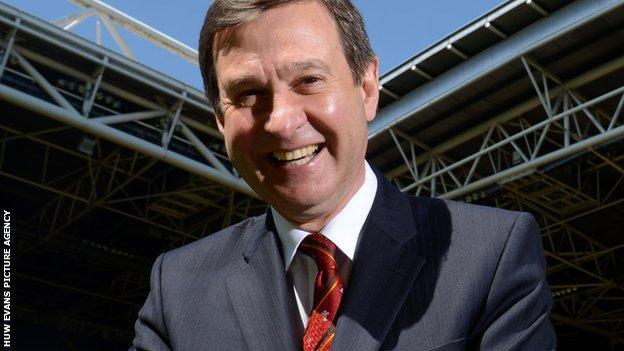 Roger Lewis has insisted the financial model that he has created in his seven years as chief executive of the Welsh Rugby Union has "worked well."

The WRU has been criticised by Wales' four regions for providing a lack of financial support.

Lewis will meet the regions in July and believes the WRU has created the "right financial model" for Welsh rugby.

"We've reduced the debt to an all-time low which means we can generate more monies into the game," he said.

"We've invested somewhere in the order of £27m into community rugby in the last five years, we've invested many millions into elite rugby and we have a model with the regions as well.

"The financial model that we have created over the last seven years since I have been chief executive has worked well for Welsh rugby.

"Going forward we need to ensure any future business plan is appropriate for Welsh rugby and I work on a five-year rolling model and I'm confident we can take the game forward."

But Lewis refused to be drawn into agreeing or disagreeing with WRU chairman David Pickering's recent statement that he was not prepared to "bankrupt" the WRU to keep their star players in Wales.

The WRU's debt for building the Millennium Stadium in Cardiff has dropped to under £20m.

The Welsh regions, Cardiff Blues, Newport-Gwent Dragons, Ospreys and Scarlets, have called on the union for extra financial help to keep Wales' best players at home.

British and Irish Lions tourists Jamie Roberts and Dan Lydiate are the latest Welsh players to move to the big-money French Top 14 League and will both join Racing Metro on their return from Australia.

George North is another high-profile Welsh international who has left Wales. He is joining English Premiership side Northampton from the Scarlets

That move sparked a row between the regions and the WRU over the funding of the domestic game.

The four Welsh regions each receive £1.5m a year from the WRU and operate a self-imposed annual salary budget cap of £3.5m, which struggles to compete with French clubs on budgets running into tens of millions of Euros.

The Union have offered central contracts for Welsh international players but that move has been rejected by the regions.

Both parties have met twice since Stuart Gallacher, the chairman of the Regional Rugby Wales group that represents the regions, urged the WRU to give the regions more money.

"Under the market forces at the moment and the economy as it is in Wales, and particularly the pressure from France... we simply can't compete salary-wise," Gallacher said.

"We have challenges in Wales economically and we are addressing them and we have to work for all of our partners to ensure we can create the right financial model within our financial means."