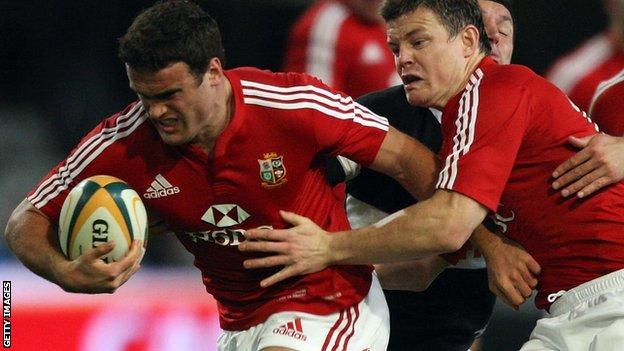 Brian O'Driscoll is relishing the chance to reignite the partnership with Jamie Roberts that served the British and Irish Lions so well in 2009.

The Ireland centre will team up with the Welshman for the first time on this year's tour in Tuesday's match against a Queensland-New South Wales Country XV.

The duo started four times together in South Africa, including the first and second Tests.

"I am really looking forward to it. Myself and Jamie hit it off well four years ago," said O'Driscoll, who will lead the side in Newcastle.

"We clicked quite early on in training and we managed to do so in games, so it would be nice to pick up hopefully from where we left off.

"With certain players you gel quickly and we managed to do that. We got off on a good footing against the [Golden] Lions (when Roberts scored two tries and O'Driscoll one in a 74-10 romp). We understood each other in training and it worked out well in games and it grew from there.

"We get on well off the pitch, as well as on it, and I'm sure that doesn't do our relationship on the pitch any harm."

Roberts, 26, was named man-of-the-series for his displays in South Africa, and the loss of both players to injury in quick succession early in the final quarter in Pretoria was a major factor in the Lions losing the second Test, and with it the series.

They will form a fourth different starting centre partnership in as many games on this 2013 tour.

After Roberts teamed up with fellow Welshman Jonathan Davies against the Barbarians, O'Driscoll partnered Manu Tuilagi against the Western Force, before Davies and Tuilagi took on the Reds.

That partnership lasted only 20 minutes when Tuilagi suffered a shoulder injury, after which George North, Tommy Bowe, Owen Farrell and Jonny Sexton all did a stint in midfield.

But while the last two combination have been experimental, the dove-tailing of Roberts's power and O'Driscoll's guile is a proven option, even if they will have inside them a player in Stuart Hogg with next to no experience of playing fly-half in elite rugby.

"It's just exciting playing with a guy who is as strong a ball-carrier as Jamie is," added O'Driscoll, 34.

"Similar to Manu, he has got a great range to his game as well. Everyone sees the size, but he's a good distributor, a good off-loader, clever in defence and reads things well.

"He has got a huge amount to his game, and I really enjoy playing alongside him. I am looking forward to getting that relationship going again."

The three-quarter line for Tuesday's game could well be seen together in the first Test in Brisbane, with Alex Cuthbert a possible beneficiary of Tommy Bowe's likely unavailability, although switching Leigh Halfpenny to right wing remains another option. 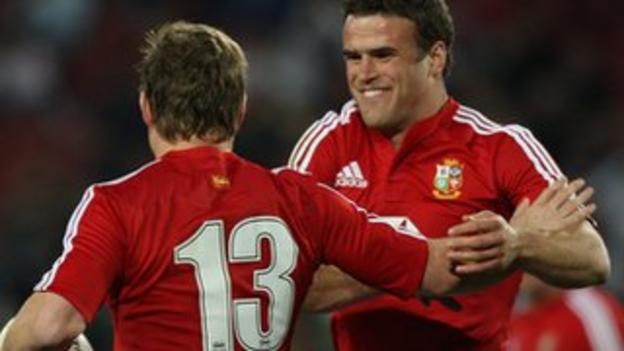 George North - devastating when he appeared as a replacement in Saturday's 22-12 win over the Queensland Reds - is set to start on the left flank, fitness permitting.

Head coach Warren Gatland only really has Tuesday and next Saturday's game against the New South Wales Waratahs to finalise his first Test personnel, with a good number of them likely to start in Sydney.

The likes of prop Adam Jones, locks Alun Wyn Jones and Paul O'Connell, and flankers Tom Croft and Sam Warburton, have all been used sparingly so far, with only one start apiece in the first four games, an indication of their likely importance in planning for the Tests.

Gatland, with one eye on Australia, will also surely want to pair Mike Phillips and Jonny Sexton together at half-back against the Waratahs, assuming Sexton's tight hamstring has eased by then.

"To be honest, the tour is probably about two matches too short for us," he said. "You would like a couple more warm-up matches before going into the first Test.

"But we probably need to start thinking about formulating the majority of the [Test] side for that Waratahs game and looking at combinations as well."