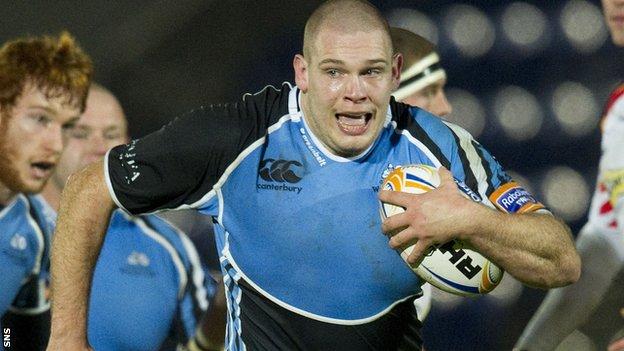 The Glasgow Warriors prop will provide cover for Euan Murray, who is a fitness doubt with a hamstring problem ahead of Saturday's Test against the Springboks.

The uncapped 26-year-old started 10 matches for the Warriors last season.

"It's really good to be called up to the summer tour. I was halfway through a training session with Glasgow when I got the call," said Reid.

"I was really surprised but I'm determined to make the most of this chance."

Ryan Grant was drafted into the British & Irish Lions squad on the eve of last weekend's loss to Samoa and fellow prop Geoff Cross has been sent home injured.

Skipper Kelly Brown and Pat MacArthur have also been forced out of the tour, with Fraser Brown called up to replace the hooker.

Brown's loss will almost certainly create the space for David Denton to resume his international career after a season interrupted by injury and a loss of form.

"It would be awesome to play," said the Edinburgh flanker. "It is 14 weeks since I last played and I am gagging at the bit to play in any capacity, all I have asked for is an opportunity to win my place back.

"Every time I felt I have gained momentum I have picked up another niggle. That is very frustrating, something I have never experienced before. Hopefully that is the end of the bad injuries."

Born in Zimbabwe but educated in South Africa, Denton is looking forward to playing in the land where he learned his rugby for the first time since he moved to Scotland.

"I will be one of the freshest guys in the squad, since I have not played," he said.

"South Africa have a simple game plan. They will play a physical game, especially after watching us at the weekend.

"We cannot let that happen. If we do not front up physically we won't win the game but we have a group of players more than capable of doing that. I am confident we can front up.

"If I am on the park there is no question what my job is. It is to make sure we are in the game physically and they are not bullying us, which happened at the weekend. I love that. That is why I play rugby."

Ruan Pienaar will play at scrum-half in place of Jano Vermaak who tore a hamstring in Durban, while flanker Marcell Coetzee is in for Francois Louw, who is getting married on Sunday.