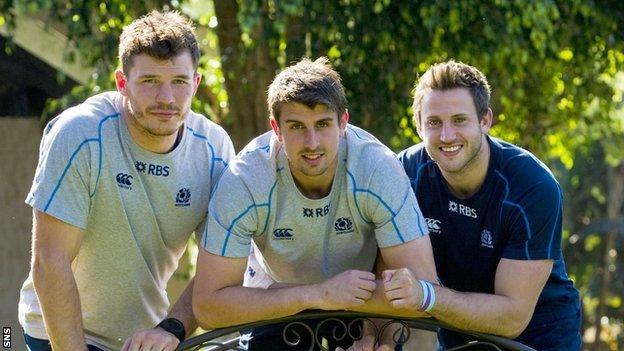 Six debutants played in last weekend's and the latest trio come as coach Scott Johnson makes seven changes to his side.

Ruaridh Jackson returns at fly-half, Scott Lawson is at hooker, with Ryan Wilson at openside.

Hamilton and Wilson had been on the bench against Samoa.

I'm hard pressed to remember so many injuries from the one Test match, but it's a fact and we just have to get on with it

Swinson has been named ahead of Grant Gilchrist, Murchie replaces Greig Tonks at full-back, while Seymour is in for Tim Visser on the wing.

Jackson replaces Tom Heathcote, who suffered concussion against Samoa, and will be making his first Scotland start since February.

Lawson comes in for after picking up an injury five minutes into his debut.

Wilson will make his first Scotland start, replacing , with Greig Laidlaw taking over the leadership duties.

A further three changes are made on the bench involving Jon Welsh, Alastair Kellock and David Denton.

Johnson said: "I'm hard pressed to remember so many injuries from the one Test match, but it's a fact and we just have to get on with it.

"I'd said from before we left Scotland that we wanted to find out about players through this tour and, perhaps, because of circumstances, some of that is being accelerated.

"But there's no doubt for me that our three new caps, for example, have had strong seasons for Glasgow and have worked really diligently on the training fields out here to earn their chance.

"We've faced South Africa a fair bit in the last decade and right now they're the second best team in the world, playing on their own paddock and with a win against Italy already under their belts.

"We have to be competitive and, once again, I'll reiterate that we have to get our accuracy and aggression 100% at breakdown to give ourselves the opportunity."