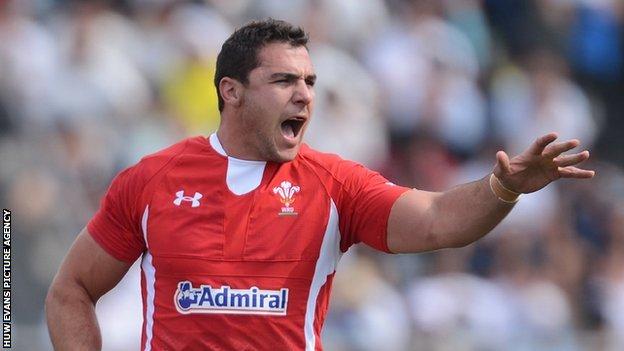 Andries Pretorius has vowed to pressure British and Irish Lions pair Toby Faletau and Dan Lydiate after his Wales debut in the 22-18 win over Japan.

The Cardiff Blues back-row starts Saturday's second Test for Wales against Japan in Tokyo after winning his first cap off the bench in Osaka.

"It was a very special moment to come on and win my first cap," he said.

"But my first cap is only the start. I've worked very hard to get here, but now the really hard work starts."

Pretorius, 27, can play either at number eight or at blind-side flanker and his appearance off the bench in Osaka was the culmination of a remarkable journey that began in Mpumalanga province in South Africa.

The trainee electrician moved from the high veldt to Durban, but missed out on a place in the Natal Sharks academy to future Springboks Ryan Kankowski and Tendai 'Beast' Mtawarira, who was then playing number eight.

But fortune put Pretorius in touch with Allan Lewis, then director of rugby at Hartpury College near Gloucester.

"Allan happened to be in Durban looking at the academy structure when he watched me train and, following a few conversations, I was offered a scholarship at Hartpury," Pretorius said.

"I arrived in the UK on my 21st birthday, effectively with no qualifications or work experience.

"I was the first person in my family to go to university, let alone leave the country, so I knew it was do or die and I had to put everything into it."

Lewis, now the Welsh Rugby Union's national academy coaching manager, brought Pretorius to the attention of Cardiff Blues in 2009, and he qualified for Wales last December.

Having already been appointed Blues captain, Pretorius was selected for Wales' 2013 Six Nations squad and although he did not feature, the 6ft 4in powerhouse has now got his chance.

"It has been a wonderful experience already being part of the squad and playing out here in Japan," Pretorius said.

"We know we have to improve a few areas of the game from last week, but I thought the young guys showed real character to dig out a win last week.

"For me it is now all about developing and staying in this squad when the Lions boys are back.

"If I can put as much pressure as possible on Toby Faletau and Dan Lydiate for their places then my job is done because it's all about what is best for this team."

Pretorius also revealed how the third member of that all-Lions back-row, Blues team-mate Sam Warburton, took time out from preparations in Australia to text a good luck message ahead of last week's Test.

"It just shows what a gentleman Sam is to be thinking of his team-mates in Japan, given everything he has got going on in Australia," Pretorius added.