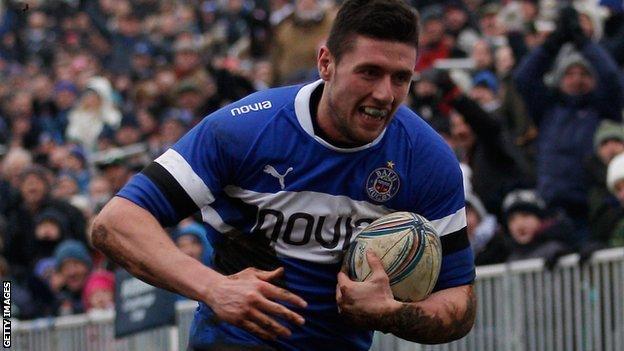 Edinburgh have confirmed the signing of Jack Cuthbert on a two-year contract after the full-back/winger left Bath.

The 25-year-old came through the English Premiership outfit's youth ranks but has not been a regular starter this season.

Having won one Scotland cap in 2011, Bristol-born Cuthbert hopes to rekindle his international career.

"I'm really excited. It's a fresh challenge for me," he told Edinburgh's website.

"It's a change of league with a very different style of rugby.

Jack's played regularly for Bath in the Premiership and has gained a lot of experience playing in a tough, competitive environment

"The Premiership is very much a physical affair, while there's a great style of running rugby brandished in the RaboDirect Pro12, with the physicality right up there with the best leagues in Europe.

"I'd love to get the chance to play more Test rugby, but I'm only focusing on Edinburgh just now.

"First and foremost, I want to make sure I do the simple things well; train hard, get as much game time and do as well as I can for the Edinburgh Rugby."

While Cuthbert made only eight replacement appearances for Bath in the Premiership this season, he was a regular starter during their Amlin Cup campaign and has played in previous Heineken Cup campaigns.

Edinburgh interim head coach Stevie Scott, said: "It's good to be able to bring another Scotland internationalist to Edinburgh Rugby.

"Jack's played regularly for Bath in the Premiership and has gained a lot of experience playing in a tough, competitive environment.

"He's demonstrated a knack for getting over the try-line and is a big, physical player.

"We're looking forward to him getting started with us on Monday, getting to know the rest of the squad and pushing for a place."